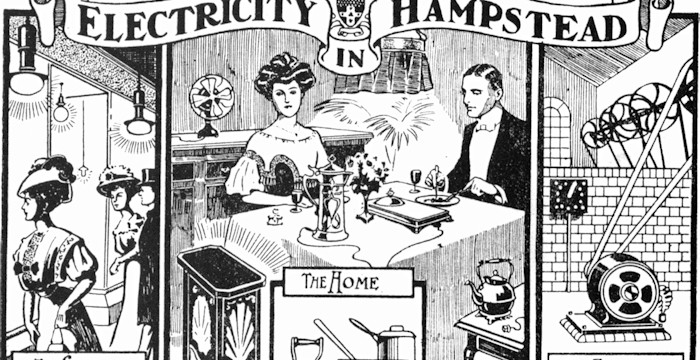 There’s a great 1910 film on YouTube of a train journey from Baker Street to Uxbridge and on to Aylesbury. Part one is here:

And part two is here:

As the train pulls out of Finchley Road station, at 1m 44 sec, two ghostly chimneys loom up on the right of the screen. They are 130 feet high and were in Lithos Road, at Hampstead’s very own electricity plant.

Several companies wanted to supply Hampstead, but in 1882 and again in 1889, members of the Hampstead Vestry (the precursor to the council), argued against adopting any scheme on the grounds that “the science of electricity is not at present sufficiently developed”.

Then in December 1892, the Vestry decided to open its own power plant, run as a private municipal company. On the evening of October 1st 1894, the electricity was switched on and an enthusiastic crowd in Finchley Road watched 22 street lamps light up simultaneously for the first time. 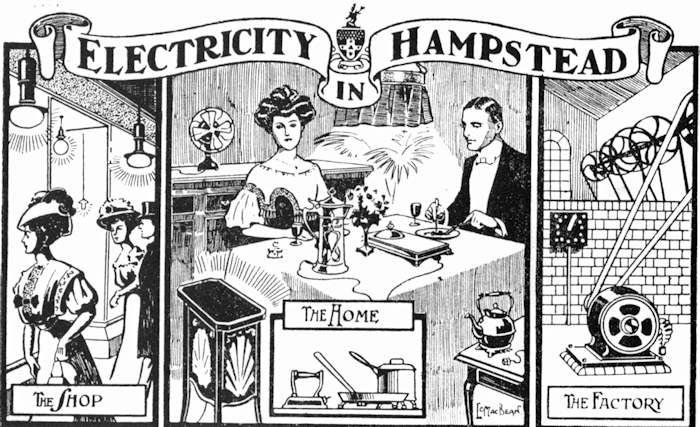 This postcard was designed for Hampstead’s Electricity Department to send to its customers. The elegantly dressed couple are having dinner surrounded by electrical appliances, including a heater, fan, iron and coffee pot. (c) Historical Publications

Despite hopes it would help reduce the rates, the plant made only a small profit, never exceeding £2,000 even in a good year. The original power station had cost around £30,000 and by 1897 it was necessary to borrow a further £30,000 to increase the generating capacity and lay more cables. Two years later, a further £67,000 was spent. By 1914, Hampstead had invested around half a million pounds in its electricity system. It remained in Hampstead’s control until nationalisation but the plant ceased generating in 1922.

The Lithos Road building was replaced by new offices for the London Electricity Board in 1975. The opening ceremony was attended by 82-year-old Arthur Munden, who remembered taking lunch to his dad at the original coal fired power station.

“Coal used to be brought to a railway siding then taken by horse and cart to be dumped in bunkers. There was coal dust everywhere and no showers.”

In fact, the station burned 10 tons a day and locals complained of the fumes. Arthur himself began working at Lithos Road the year the film above was made. In 1983, the LEB offices made way for housing.

What have I missed since August 8th?