Today was the final official day for comments on 153-163 Broadhurst Gardens a.k.a. “Mario’s block” for those of you can remember the Greek restaurant that used to be there.  As West Hampstead Life reported nearly three years ago during the first consultation for this site there were two options on offer: traditional or modern.

The site is in the South Hampstead conservation area, although not of significant architectural merit (it’s not listed).  It is not in the West Hampstead Growth Area but close enough and big enough to warrant interest.

At the initial presentation there was a high turnout – offering design options to local people is a recommended strategy for getting buy-in to a proposed development. It wasn’t clear what happened after that presentation as things went quiet. But in the background, the owners continued to consult with Camden planners (as they are allowed to do – and have to pay handsomely for).  The new Design and Access statement says that “there was a clear local preference at the local community consultation for the traditional building that reflected the immediate surrounding area” (although they don’t say by what percentage) and a preference for red brick over the yellower London stock.

At the consultation there was also concern about the bulkiness of the building, which has been addressed during design development. For example originally there were 19 flats in the building, the initial proposals raised this to 39 (which seemed squeezing a quart into a pint pot). This has been scaled back to 30 units. This reduction has come about by scaling back the rear of the building (originally the building was going to incorporate 23 West Hampstead Mews). The western side of the building has also been reduced to four storeys to match the height of the ENO building next door. 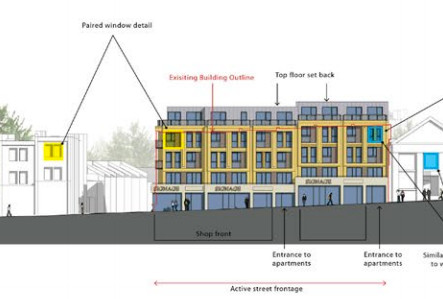 What hasn’t changed much is that the development includes two large (ish) retail units with storage space underground.  The West Hampstead NDF objected to the scale of the units and the Council’s own policies suggest it should ‘ensure that West Hampstead continues to provide a mix of units to serve the local area, but which will avoid the loss of ground floor units’. Is replacing the existing four or five units with two large ones, one of which may be a restaurant again, in accordance with these policies? This will also be an issue for 156 West End Lane.

The site has amazing transport links – you could almost fall out of your bed into the C11 and not much further onto the tube –  which has an impact on the density of development. It’s rated “6a” for transport accessibility, which means in practice 175- 405 units per ha. This latest plan works out at 344 units/ha, so within the range but at the upper end.

Both the NDF and CRASH (South Hampstead residents association) have challenged the lack of affordable housing, but no viability assessments have been disclosed yet. The development should generate more than £500,000 in community infrastructre levy thought – and 25% of that must be spent in the local area).

Sadly, the sole tree on the site (behind 159) would be removed and not replaced. If developments are supposed to be sustainable, perhaps Camden and the developers could look at options for replacing trees on or around the site. Broadhurst Gardens is a quirky retail area, could it be enhanced by some greenery (something a mini-masterplan could include)?

153-156 Broadhurst Gardens is a significant site in our area, which hasn’t received much scrutiny after the initial consultation. Still, it is good that local opinion has fed into the design development, which has led to a better building. It is super, no. Is it good enough? We will have to see what the planning committee decide.

What have I missed since September 5th?