As the sun went down on Tuesday, a crowd began to assemble on Fortune Green. The screen was slightly smaller than some had anticipated; the bikes that would be used to power the equipment blocked the wider viewing angle; there were a couple of technical hitches and everyone was bitten to shreds by mosquitoes.

And it was great. 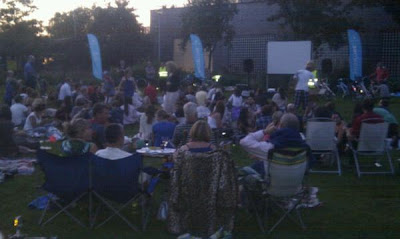 This felt like a real community event. People brought picnic rugs and bottles of wine, volunteers got on the bikes to ride for as long as they could; there was free popcorn courtesy of the Mayor of London’s Showtime funding; and the film was the charming Oscar-winning 1979 coming-of-age cycling film Breaking Away.

The Friends of Fortune Green, who put on the event, are already making plans for a second screening – most likely at the end of September. Keep your eyes peeled.