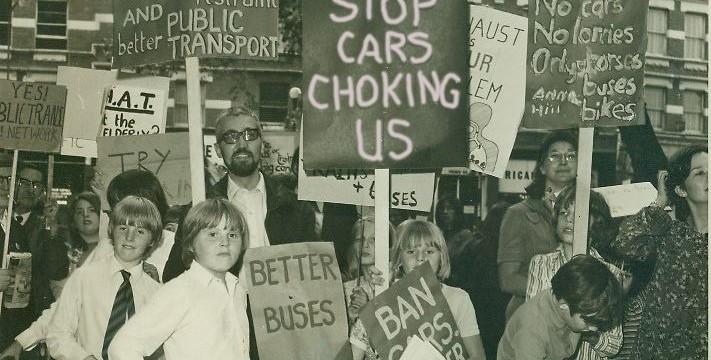 The library has been hosting an exhibition celebrating the 40th anniversary of local campaign group WHAT. So, what is WHAT and what has it ever done for us?

Plenty, it turns out.

WHAT stands for West Hampstead Amenity and Transport, though it hasn’t always! It’s a local pressure group that addresses “local transport, open space, local shopping, planning issues and all aspects of the local environment.” Fairly comprehensive then.

Specifically, WHAT lobbies transport interests, the council and developers, holds public meetings and (of course) issues a newsletter.

WHAT began as a response to Camden’s May 1973 Road Network and Environmental Policy Management document. They were sexier times, the 1970s.

This plan was set to change the face of West Hampstead. It This proposed a borough-wide network of main distributor roads, which would take the main bulk of traffic. Between them would be environmental areas that would be traffic free. The main distributor roads in this area were to be Finchley Road, West End Lane, Fortune Green Road and Mill Lane. 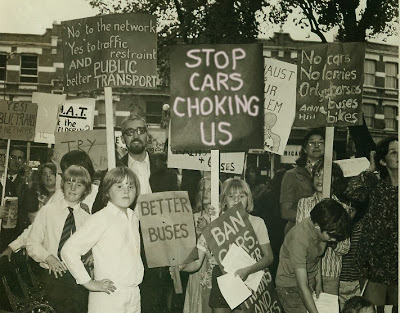 Camden’s proposals sparked a torrent of protests and many local groups formed under the banner of ‘No to the Network’. WHAT was one of these groups. In mid-July of 1973, college lecturer Don Hill organised a petition on West End Green against the new network policy. He took this to Camden council, who promised to oppose any increase in traffic flow along West End Lane. Don and his wife Claire decided to form a group called West
Hampstead Action on Traffic (WHAT).

In September, WHAT staged a bigger protest at West End Green. Local families and residents brought the late afternoon traffic to a halt in protest against the GLC (Greater London Council) and Camden policy. The protests worked and the plan was dropped.

It would be another four years before WHAT’s name was changed to West Hampstead Amenity and Transport to reflect its widening interests.

What has WHAT done?
The group has been involved in a very wide range of issues over the years.

The West Hampstead interchange: WHAT has been involved with the idea of an interchange at West Hampstead since the 1970s. Here is a discussion document it published (price 20p) in 1979 urging better use of the railway lands. 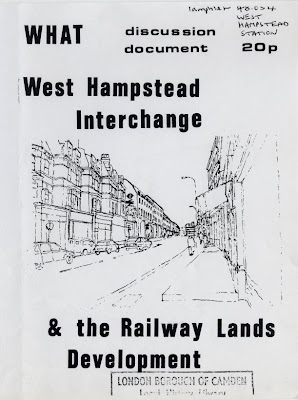 WHAT wanted a craft and light industrial development with plenty of pedestrian access. Many years later, these issues are still live as development takes place at West Hampstead Square.

At the same time the Ring Rail group had ideas for this area and also for the development of what was then called the North London Line (now the Overground) into a rail ring round London. This finally came to fruition last year when the Overground network tied up the final missing link.

Most recently WHAT has been working closely with London Overground about its plans to develop the station and to put in a lift.
Sainsbury’s trolleys: In 2001, West Hampstead was littered with trolleys from the O2 Sainsburys. WHAT gathered up all the trolleys it could find, wheeled them to the O2 site and demanded to see the manager of the store. Sainsburys subsequently employed a man with a van to go round the area collecting the trolleys. It also introduced the electronic barrier which prevents trolleys being wheeled into West Hampstead.

Buses: WHAT has lobbied about the bus service for many years. This includes lobbying against bus noise and vibration at West End Green, with the result that there are now bye-laws that prohibit buses from keeping their engines running. In 2005, WHAT’s long running battle to get bus stops near the stations was successful although since then, developers have suggested taking them away again!

Thameslink: In 2004, Thameslink wanted to stop trains stopping at West Hampstead and Kentish Town for at least six months because of work going on further down the line. WHAT gathered many hundreds of signatures for a petition against this; Camden got involved and Thameslink changed its minds!

Local planning: WHAT comments regularly on local planning applications and is closely involved in the current Neighbourhood Development Forum.

Looking to the future
Aside from commemorating all the work WHAT has done, the exhibition, which runs until November 16th, is also a reminder that WHAT is only as strong as its membership. It’s always on the lookout for new people to join. Members can come along to any monthly committee meetings and it only costs a fiver for two years’ membership. Here’s the form.

Fireworks back with a bang at Ally Pally Kilburn rifles: 1931