This past fortnight has been dominated by the European elephant in the room, the referendum. Overall, Camden voted 74% in favour of remain . Observers at the count put Fortune Green and West Hampstead wards slightly above this at about 75-80% each in line with our own unscientific poll. Highgate ward appeared to be most in favour of remain at around 85%. Exact results by ward weren’t disclosed because the 20,000 postal votes were allocated in chunks but not on a ward basis, so observation is the closest we will get.

A local political reverberation of the fallout as Cllr Andrew Marshall, former leader of Conservative Group on Camden Council and staunch remainer, announces he won’t be standing for re-election in 2018.

West Hampstead featured heavily in the media on the morning of the vote itself with our Photo of the Week below making appearances in the Mail Online and Telegraph among others. West Hampstead also got a (not entirely positive) name check on Channel 4 News the night before (ff to ~5’40”)

West Hampstead Square has been renamed Heritage Square. Is this Camden’s doing? (why wasn’t there a referendum?). 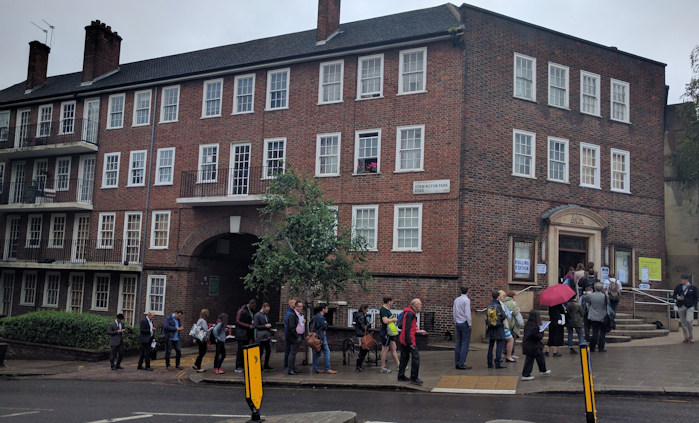 Plans are out for the redevelopment of 156 West End Lane (a.k.a Travis Perkins building). Apparently not much change from the original plans. There will be a special NDF meeting at the Library on Friday 1st to discuss.

The redevelopment of the Overground is due to start soon, but is going to take some time.  And as luck with have it, there is a talk at the Library by Iain Sinclair on 4th of July on his new book about his observational one day walk round the stations of the London Overground (aka the Ginger Line).

The Jubilee Line’s night tube service is due to start September 2nd.

Camden has started time-banded rubbish collections on West End Lane and Fortune Green in an attempt to keep the streets cleaner. It’s early days, but seems to be working.

Lower Ground Bar, which was temporarily closed after a street brawl is now apparently permanantly closed. Turns out it was operating without a licence.

The new delivery-only Pizza Express on West End Lane is to become a Firezza – a pizza joint owned by the same company.

What is happening at N’Fes? Looks closed, but turns out it is just being refurbed. Will be a cocktail bar with live music on Fridays and Saturdays, apparently.

The first Whampdinner for a while was a big hit. Guglee hosted 26 of us before a few hardy souls braved the torrential rain for a follow-on drink at The Railway. The Gallery’s basement flooded apparently. If you want to know about the next whampdinner join the mailing list.

It’s been two weeks since the Big Lunch weekend. Here’s what you missed.

JW3 continues to put on a run of interesting events (more on those later). One that caught our eye is the Einstein festival starting on Tuesday. Will it be good? We think so, but it’s all relative.

And in case you haven’t heard, next weekend (Sat 2nd and Sun 3rd July) is the annual Jester Festival on Fortune Green. It started in 1973, the same year Britain joined the EU (or EEC as was then). Mostly stuff for kids (lots of it free) but other activities too; a fitness competition, some good live music and plenty of cake buying opportunities.

Kingsgate Road turns out to have a tenuous connection to the KKK.

One local gives his view on how to rent your flat without turning to one of West Hampstead’s many many estate agents.