Ladudu closes its doors for the final time this week.

After Ballymore had to take its enormous sign down last week, this week M&S had its application for an illuminated sign at West Hampstead Square turned down by Camden. Meanwhile, Ballymore marketing material seems to think West End Lane has shifted over to the Finchley Road (and apparently we lie between Hampstead, Primrose Hill and St. John’s Wood).

Next Sunday is Mothers Day – we rounded up a dozen gifts you can buy locally. 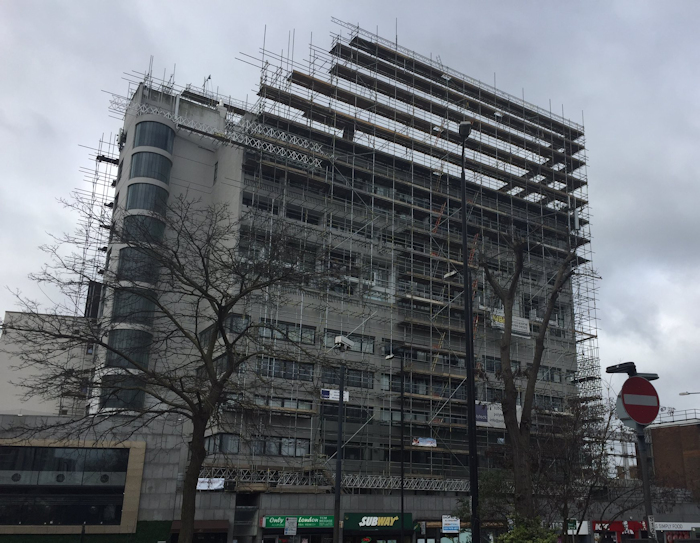 No reason for thinking Cresta House scaffolding is in any way insecure, but certainly looks vertiginous. via Andrew Marshall

One mother who will not be at home on Mother’s day is Nazanin Zaghari-Ratcliffe who was imprisoned in Iran almost a year ago. She is being denied medical treatment for what appears to be a slipped disk.

A local boy tragically died of an extreme asthma attack after being released from the Royal Free.

West Hampstead tube station is apparently on a TfL short list of some 50 stations that need funding for step-free access.

West Hampstead and Fortune Green Safer Neighbourhood teams are being joined by the Kilburn team in a larger more flexible pool, when needed. Commercial burglaries are down this month after a spike in Jan/Feb, but car crime is up so don’t leave any valuables in your car overnight.

Miss Bake-a-boo herself wrote about the proposed redevelopment of her former premises. It’s well worth reading.

At the community consultation on the redevelopment of Gondar Gardens, it was suggested somehow that two previous applications for 16 units + 28 units now add up to the 108 units being proposed. Um?

Maeve McCormack, Labour councillor for Gospel Oak but resident of Broadhurst Gardens, is standing down as she has been priced out of Camden. In 1999, an employee paid 9.6x their salary for an average Camden property, last year that had risen to 19.6x.

Jim Carter is in conversation with Danny Boyle in a fundraiser at the Tricycle on Sunday 26th. Take your mother for a rather different (but still local!) mother’s day present?

Talking of the Tricycle, it’s the annual takeover in April though performances are in other venues as work continues on the theatre

Coming up this week
Beckett and Jazz at Locally Sourced on Monday and a barn dance at Emmanuel on Saturday. West Hampstead is nothing if not eclectic.

The book group at Swiss Cottage Library is looking at “Reading Lolita in Tehran”. While Phillips Sands is making an author’s visit to West End Lane books.

Lots of photos and comments on the arrival (onslaught?) of the new wheelie bins.

@WHampsteadLife @WHampstead I'm thinking of renting mine out to tenants. It's bigger than my bedroom.