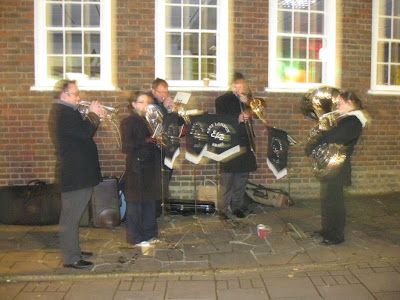 Tuesday night was #whampcarol night. Clear skies meant a cold night and, with the bridge still closed due to the flooding, West End Lane was eerily quiet with minimal traffic and surprisingly few pedestrians.

Undetterred, the band (the magnificent @eastlondonbrass) arrived and together with @helenstone, @gitfinger and my fellow mince-pie maker @SarahReardon, we set up our stall. Even before we’d started playing, people were generously giving up their small change to the two charities: The Winch and the band itself, which works with kids in east London.

As the cold fingers worked their way through Christmas classics there was a regular stream of donations.

The Holly & The Ivy, “live” from West End Lane (thanks to @gitfinger).
Listen! We had both sides of the road covered so no-one could miss us and despite the quiet evening the hit-rate was high. A small cheer went up when the first £5 note was pushed into the collecting tin, but it wasn’t to be the only one. After almost 90 minutes playing and with the temperature dropping we decided enough was enough and we’d leave the people of West End Lane in peace. We hurried to the Alice House to defrost, taking our table and of course instruments in with us. One table started chatting to us and suddenly we were offered £60 to play two carols right there. The bar manager very graciously agreed we could, and our pot was £60 bigger. Thank you very much indeed to that generous man. 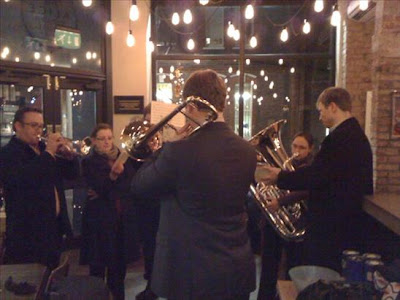 We raised just shy of £250, which was outstanding for such a quiet evening. Already there was talk as to how we could make next year’s bigger and better. Thank you to everyone who took part, and especially to all the people who gave money. We really appreciate it.