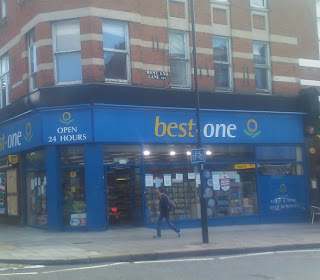 Ten days or so ago, it was brought to my attention that Best One – the mini-market on the corner of Fawley Road and West End Lane – was covered in memos from Sainsbury’s regarding an impending licence application.

I posted this on Twitter and got a few tweeted groans in reply, along with a more interesting response from local councillor @KeithMoffitt who said “Understand Sainsbury’s interested in Best One site but nothing finalised yet, so licensing notice odd.”

Yesterday, I noticed that the licence application had now been registered at Camden and is online. 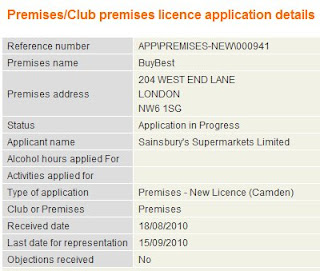 Posting this elicited far more reaction, with the usual comments about the destruction of the character of West End Lane, the replacement of independent shops with chains, and the swamping of the neighbourhood with supermarkets. I think it is debatable whether replacing a franchised mini-market with a large-brand mini-market is particularly a bad thing, although it does serve to homogenise further the high street.

A broader issue is whether large chains can (and do) pay over market rates for rents and leases, thereby raising the market level and squeezing out existing independents as well as making it almost impossible for start-ups. I also think it’s worth looking at what we do have in West Hampstead.

I am building a directory of all the shops, restaurants, consumer services in the area and was astonished that I could tally more than 50 places that served food without venturing beyond the traditional borders of West Hampstead into Swiss Cottage or Kilburn. Yes, some of these are national chains (only four restaurants: GBK, Nandos, Pizza Express and Strada), especially in the take-away market, where some are franchises just like Best One) but the vast majority are independent.

We also – as everyone knows – have an amazing number of estate agents and a lot of charity shops. We don’t have very many ordinary independent shops – but we do have some, such as the electrical shop, the bookshop, the greengrocers and others, especially those tucked away along Mill Lane.

I’m not in the militant camp that thinks we should boycott chains, or who won’t shop in Tescos. When possible, yes, I do try and support local businesses but like most people I am also beholden to cost and convenience.

My request from this blog is simple: by all means berate the homogenisation of West End Lane, and by all means let your local councillors know your views on the matter (although remember that at the most basic level there’s little they can do to prevent individual shops from moving into existing retail units), but above all if you do believe in maintaining some independent shops in West Hampstead then please use them from time to time.

I know some of you don’t see the problem and are quite happy to see more chains move in as long as they’re selling things you want to buy. I also know that a lot of you do already make efforts to shop at independents where possible. But if you’re someone who always buys books from Amazon, why not – once in a while – buy or order a book from West End Lane Books; forsake Homebase for the electrical shop, the Iverson Road nursery or The Kitchener; or escape the congested fruit & veg aisle in Tescos and walk a minute up the road to the greengrocers. Not necessarily every day, but some days. Even if costs you a few pence more (and stop press folks: the chains in fact are not always cheaper), think of it as a small investment back into your community.