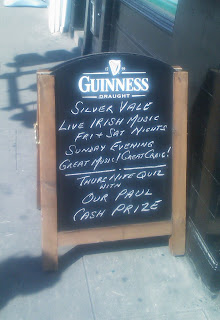 The arrival of The Betsy Smith – a pub/music venue – on the Kilburn High Road is yet another indication that the old Roman road is finding its way back onto the musical map.

After my brief round-up of West Hampstead’s musical heritage, I was delighted to be invited to join accredited blue badge guide Simon Rodway on a walking tour of Kilburn’s musical treasures. This was organised by Camden council, who are putting together a self-guided podcast. October is also Camden mayor Jonathan Simpson‘s Music Month, so what better time to catch up on music on the very edge of the borough – an area often overlooked in favour of Camden Town and Chalk Farm.

We kick off outside the iconic State building. Recently taken over by the Ruach Ministry on condition that the decorative interior was restored. When I first moved to Kilburn and lived round the corner from the State it was a bingo hall, but when it opened in 1937 it was Europe’s biggest auditorium , seating 4,004 people. Anyone and everyone has played there and The Who’s live performance there is a DVD classic. It is also home to one of the largest working Wurlitzers in the country and this too will be restored to its former glory.

Working our way north up the High Road (bizarrely with a full police escort, which makes us look like VIPs but does nothing to suggest that this is a perfectly safe part of town) we pause outside the National. This enormous venue was built in 1914 and was a cinema and ballroom initially. In the 1980s and early 1990s bands including Suede, Nirvana, The Smiths and Blur played here. It too was taken over by an evangelical church – the Victory Christian Centre – but this ran into all sorts of problems. At the moment the building is used by another church movement, the UCKG.

The next stop on the tour is not really music-related, but it is the epicentre of Kilburn’s cultural revival. The Tricycle Theatre is certainly one of the most respected off West End theatres in London, with a reputation for staging political plays that often transfer to larger theatres or go on tour.

From the Tricycle, with its “opened by Emma Thompson” plaque we head across the road to the Sir Colin Campbell. I’ll be honest, this is one of those pubs that I always thought you’d have to pay me to go in. It looks like an old-man Irish pub and upon entering there is indeed one old man sitting at the bar. The landlord looks surprised to see us, and does a double-take when the police escort walks in. But when prompted to tell us about the music at the pub he is more than happy to tell us about the sessions on a Friday night. It all sounds genuinely Irish and not tourist Oirish, and actually the sort of place that could be a good night out if you threw yourself into it. 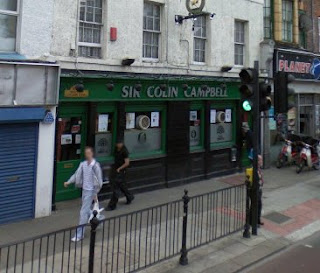 We walk up to The Good Ship, the first of Kilburn’s cluster of live music venues. John, the owner, is there to meet us and give us the lowdown of the low stage. The Good Ship tends to have younger up-and-coming bands. John tells us of the night Adele and Kate Nash shared the bill, and explains that bands like the back projection that lets them have more imaginative visuals. 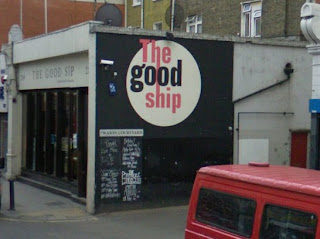 I throw in a good plug for the Monday night comedy. What I like about The Good Ship is that it’s completely lacking in pretension. It is also willing to try things out and has hosted spoken word events and quizzes as well as music. Right now, it’s the most reliable comedy club in the area and at £4 an absolute bargain. Recent better known acts have included Josie Long, Milton Jones and an unbilled impromptu opening from the great Ed Byrne. But back to the music.

We turn off the High Road to a place none of us has ever even heard of. The Institute of Contemporary Music Performance is a living and breathing rock school. It offers full BMus degrees as well as diplomas, foundation courses and specialist courses. We actually gatecrashed and they’re weren’t expecting us but the college’s CEO Paul Kirkham appeared and gave us a quick talk about the college. Its aim is not to churn out the next X-Factor winner or Simon Fuller band, but rather to give students a sustainable career in music. He cited the fact that half a dozen or so students were at Glastonbury this year as backing singers/musicians. The college was originally in Acton before moving to its rather swish Dyne Road premises, of which it is taking over more and more floors.

By now, Andy at The Luminaire was ready for us. Modest to a fault, he ascribed the venue’s success to the fact that there are clean towels in the dressing room. The club, above the Kings Head bar, has the biggest pulling power in the area. It has a slight tendencey towards bluesy/folky musicians, but also hosts its fair share of pop & rock bands. The Libertines, Editors, James Morrison and Jarvis Cocker have all played there, while some months ago I saw the last living Delta bluesman David Honeyboy Edwards at what may well be his final London gig.

The Luminaire’s famous “silence during the music” policy is almost a trademark and although it’s often ignored during the support acts, it has undoubtedly contributed to the fact that artists like the place. Punters like it because as well as good acts, the managemnt is conscious that they often have to get home on public transport, so sets tend to be over in time to catch the tube or train. Put it all together and it’s not surprising that Time Out and Music Week have both given it Music Venue of the Year awards. It also has an excellent website (something a lot of London’s music venues would do well to emulate).

The last stop on our Camden musical tour was meant to be Powers. Owned by former Mean Fiddler founder Vince Power, it is a more intimate music experience and again focuses on up-and-coming acts. Sadly, we were a bit early to have a snoop around and as this was the one place I hadn’t been to I had been intrigued to see inside.

We’d managed to spend several enjoyable hours exploring the musical legacy and contemporary scene along the Kilburn High Road (with the exception of The Westbury). It’s great that a street that inspired the name of Ian Dury’s first band and that has let Marilyn Monroe and Kurt Cobain entertain its residents, is still rocking.

UPDATE May 2011 – Camden has produced a PDF map of the musical heritage of the High Road.

The Betsy Smith, Kilburn – Opening night What have I missed since September 26?