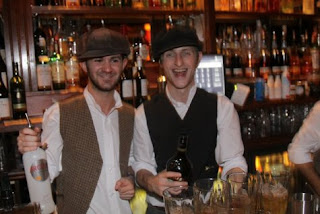 The Betsy Smith opening night last Friday attracted the crowds. The bar staff, vying for the Artful Dodger lookalike prize, were struggling. At one stage the crush at the bar was seven-deep and getting a drink took upwards of 40 minutes. Bluntly, the place was heaving.

A cunningly worded press release had set the scene earlier in the week. This sister venue of The Winchester in Islington and Ealing’s Lodge Tavern was already being referred to as the “Narnia” pub although it struck me more as Alice in Wonderland.

The front of the bar, in what used to be Osteria del Ponte, is heavy on seating and a little crammed. As my companion commented on arrival, “It’s about 15% All Bar One”. Ouch.

Force yourself through to the back, however, and the décor, ambience and style change gear. Here, the tables are more secluded. There’s a mezzanine level perfect for private hire and below that a small area where a band was setting up. This was clearly the place to be. It’s darker, quirkier and far more seductive, especially on a night when the hordes were clamouring for their cocktails at the bar.

The drinks list is laden with contrived idiosyncracies, with cocktails categorised by their degree of whackiness. Parsnip and blue cheese? Really? More standard cocktails and of course beer, wine etc. are also available.

The Betsy Smith has aspirations to be almost 24-hours, opening 8am-midnight Sunday through Thursday, and closing at 3am on Friday and Saturday. On opening night there was finger food being passed around, which was certainly better than average and bodes well for the quality of the kitchen.

The Earth Lights Boogie Band, led by Spencer Kennedy, cranked up the volume and blasted everyone’s eardrums through the wardrobe or looking glass or somewhere into the nether regions of Cricklewood at the very least. They were good. Very good in fact. Playing a mix of boogie and funk covers at full throttle, with a few poptastic tunes thrown in for good measure, the surprisingly (and pleasingly) mixed crowd settled in to listen for the first set. At such decibels, talking was pretty much out of the question.

By the time the second set kicked in, numbers had thinned slightly, it was possible to get a drink within just 10 or 15 minutes (!) and the small dance floor was getting its first workout. In the dark, with the multiple lampshades on, any All Bar One-ness from earlier in the evening had vanished. Revelling continued into the early hours with Louisubsole on the decks. 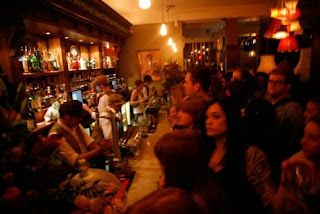 The Betsy Smith looks like it will be a success as long as it can keep appealing to a mixed Kilburn crowd. It’s too far from the entertainment core of Kilburn (Tricycle/Good Ship/Luminaire/Powers) to draw many drinkers from there, but close enough to The Westbury to be direct competition. It will need local support as well as to lure people from beyond Kilburn for its DJ nights. Midweek reports since opening night have suggested it’s been quietish and coupley rather than meat-market sweat-on-the-dancefloor, but if it can get both groups in it might just last. If it hopes to turn NW6 into Shoreditch, it might face a revolt.

For more details on what it offers, check out its Facebook page, along with loads of photos from opening night
The Betsy Smith
77 Kilburn High Road
NW6 6HY
T: 020 7624 5793

What have I missed since September 18th Rock on the High Road: Kilburn’s music then and now