What happened in West Hampstead while George Osborne was giving all our money to Wayne Rooney?

The first cut is the deepest
Last Monday, a rush hour power failure left Jubilee tube trains stuck between St Johns Wood and Baker Street and people (including many #whampers) had to be evacuated.
On Wednesday, when attention was on the government’s spending review, TfL announced ticket prices and changes to some travelcards for 2011.
TfL are apparently “not playing ball” according to Cllr @KeithMoffitt when it comes to switching off the West End Lane traffic lights at Iverson Road, which are redundant while Iverson is closed.
STOP PRESS: another accident by West End Lane Tesco Express witnessed by @bubela: “Just saw yet another accident at corner Lymington/WELane! Car drove into the large bollard base, tyre blew. Driver shocked but OK.”

On Friday morning, there was a house fire in Gondar Gardens.
The FBU went on strike on Saturday.

But despite a general work-to-rule, West Hampstead fire officers saved a toddler’s birthday.

A cut above the rest?
Camden released details of the “average” resident of the borough.

Cut crime
Swiss Cottage ward has seen a fall in robberies and burglaries over recent months.

Directors cut
Yet another customised tube map – this one renames stations based on film connections. West Hampstead is “Scenes of a Sexual Nature”.

Cuts like a knife
The Waitrose cookery school at Finchley Road is open for bookings.

Cutting remarks
Bought a Groupon voucher for The Alice House? If you’ve not reserved already, you won’t be allowed a table until the new year now. @ZoeUm was “furious”, but Groupon have offered her a full refund.

Square cut
Plans are afoot for some big changes at the Grove End Road end of Lord’s.

Cut to the chase
When are the next opportunities to meet up?
Nov 6th, Fireworks at Roundwood Park. Plan is to meet at WH tube at 7pm. Drinks in Willesden after.
Nov 12th, Broken Glass at Tricycle Theatre. If we can get 11 people we get a 10% discount. Oct 25th is cut-off date to let me know.

Photo of the week
No Tweet of the Week this week. Instead this fantastic photo from a set of three by @rcsoar. 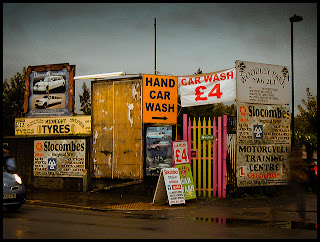 What have I missed since October 10? West Hampstead’s witches and warlocks