Yes, it’s catch-up time. While you were all gorging yourselves on mince pies, feeling like death warmed up while forcing yourself to be nice to elderly relatives, and then seeing in the New Year, what was happening in West Hampstead and surrounds?

There was snow of course. Lots of you commented on Camden’s response on the blog.
Cllr Andrew Marshall wrote his own thoughtful reaction.

Andrew also commented on the cuts in Camden, and on the alterations to the High Speed trainline route out of Euston, including a detailed map of the proposed route through the area.
Talking of things coming up this year, I collated everyone’s local predictions for 2011, and also set a quiz based on 2010’s news

Not a lot happened over Christmas, although Kilburn’s St Augustine’s Church featured on Sacred Music on BBC4 on Christmas Eve. Sadly, the concert doesn’t appear to be on iPlayer.

Down in that part of Kilburn, there’s been a pop-up art project underway for a few weeks.
Back up the High Road, there’s a planning application in to turn the Luminaire and King’s Head into flats and a shop.

Remember Conservative PPC Chris Philp? He has a new role in the AV referendum. It also turns out he was the highest spending PPC in England!
The Private Space – the new stylist on Mill Lane – is offering a 25% discount to people from local businesses starting from January.

With the Jubilee Line closed for much of the holidays, it was delays on the Met Line that made the news
And finally, Belsize Road’s popular cheap restaurant Little Bay is on Twitter.

Tweets of the Week
As we’re covering a fortnight’s worth of news, two tweets today. First up, this observation from Bill Glover:

And then a New Year’s exchange between former England cricket captain Michael Vaughan and Atiq Ghafoor: 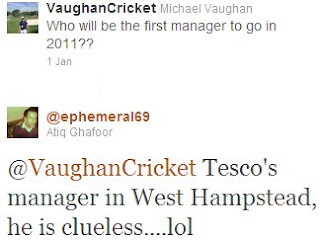 What will happen in 2011? What have I missed since January 2nd