small hours is different. It would be as at home at Tate Modern as it is in the Hampstead Theatre’s Michael Frayn space. Indeed as the small audience (restricted to just 25 per performance) assembled in a hallway, we were told this was an “installation”. We were then asked to remove our shoes. 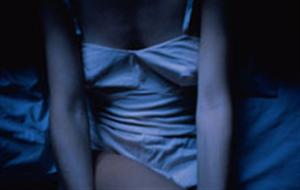 The play, directed by the sometimes divisve Katie Mitchell, takes place in a closed off large living room. The audience sits around the sides of the room on furniture; the atmosphere is intensely claustrophobic. Over the course of the hour there is almost no dialogue, but the play is far from silent. There is a palpable sense of the uncomfortable as actress Sandy McDade paces around the room confronting her inner demons. The interruptions come at first from the radio and then a phone ringing that makes everyone jump. Then we hear a baby crying.

As we move through the small hours of the night, the room becomes filled with noise to drown out the crying child. Nigella’s perfect life blares from the TV, the vacuum cleaner hums and, finally, music is cranked up high as the woman seems to force herself into a series of trance-like states. She checks on the child once or twice; then the dawn chorus begins and a new day begins.

This work by Lucy Kirkwood Ed Hime is a play wthout drama – it creates a mood but does little with it. There are references to all the (en)trappings of many women’s lives: children, husbands, mothers, cleaning, cooking, make-up. But empathy is hard to come by with such a stark production and a performance that switches strangely from the naturalistic to the stylised.

I’m glad I saw small hours, but wouldn’t choose to see it again and would recommend it only to people who are prepared for something a little unconventional and deliberately lacking in exposition. I found it intellectually interesting but not especially stimulating.

Wanderers start the season (again) What have I missed since January 16th?