I got sent a fantastic link via Twitter this morning. It was to a photograph taken in 1965 of the State building on Kilburn High Road. The photograph is interesting, but the history site that it’s part of turned out to be a treasure trove. 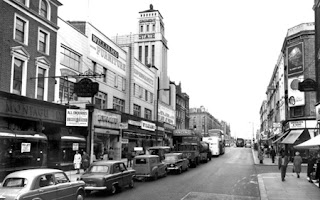 Click on any of the seven photos of Kilburn taken around the same time, and you’ll find a few dozen comments from people who grew up in the area. It takes a bit of diving into the site to find all of them – some are comments to the initial memories, and so on. They paint a picture of post-war Kilburn that in many ways we could recognise today: a lively, bustling, rough-around-the-edges neighbourhood that people generally have an affection for, with characters such as Biff Lewis (who of course gets into a fight) and Susan the Swedish employee at Woolworths.

Naturally there are also some big changes – not least in the number of cinemas. One person recounts four different ones: the Ionic, the Grange, the Essoldo and of course the State.

I shall leave you to browse the site, but here’s one of my favourite excerpts as Fred Parker’s recalls trips to the cinema:

“Every Saturday evening I would go to the ‘pictures’.. with a group of friends. Often we would have to queue to get in and maybe stand for some time once we got in. We sat in the 1/6d seats. Films ran continuously in those days and we often saw the end of the film before we saw the beginning. We would walk home after the cinema and probably buy a bag of chips plus a pickled onion if we were flush.”

Thanks to Jon Kelly for the original link. Look out for an architecture competition on the blog in the next day or so. And if you want to read about some West Hampstead history, check out this post about how our part of London fared during the Second World War.

Update 4.30pm, 20th Century London sent me a link to some more great old photos of Kilburn including one of the Rolling Stones backstage at the Gaumont State.

Cooling down with Orange Jubilee Line finished, but closures persist