West Hampstead will be a place where local communities experience real benefits from the opportunities that come with redevelopment and people feel that they have influenced and shaped how investment is made in the area. Support for local business will be a key part of enhancing the distinctive village character and more local jobs will contribute to a successful local economy. Local services, housing, open spaces and facilities will meet the needs of local communities as will the quality of experience that people have moving around the area. Cooperation with local people, voluntary sector organisations, developers, businesses and the council will make this happen.

This is the vision for West Hampstead, as laid out by the place plan finally published by Camden council. From this extract it feels a bit like “local shops for local people”, but this document really isn’t that parochial. It has been quite some time in the making, and I’ve reported on its progress over the past 12 months.

You can access the original, or view a version where I’ve ringed the passages that I think are particularly worth reading (also embedded below).

The idea of the Place Plan is to set some context for local development – of which much is planned over the next 5-10 years. It has no statutory power, but the council are supposed to take it into account when assessing planning applications, and budget allocation. It is very strongly informed by local residents – even by readers of this website (as it mentions on page 10) – and I can imagine that lobbying groups are likely to refer to it heavily when responding to proposed changes.

One of the underlying objectives is to make people feel (hopefully justifiably) that they have some input into what happens around them. In this regard, the Place Plan should dovetail with the Neighbourhood Development Plan.

To quote the report:

“This ‘placeshaping’ approach is about taking the opportunity to think and act strategically about how to address these needs in terms of investment decisions, service delivery and physical changes. Understanding local concerns and priorities is at the heart of this approach which is all the more important against a backdrop of reduced Council resources arising from reductions in central government funding.”

Although it has no legal bearing on anything at all, it does purport to enable locals to hold the council to account over the concrete measures that it says it will undertake (starting from page 46). It is also a dynamic document and action plans can (and hopefully will) be updated as the situation evolves.

The plan is broken down into five sections, and each has a series of objectives. 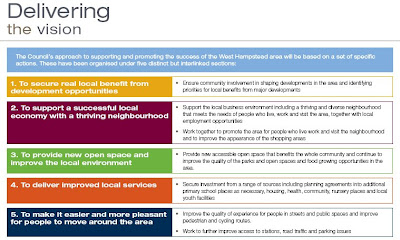 Generally there’s not much that’s controversial here. I’ve been at two of the group consultation sessions and these were the main topics that emerged – naturally with different people placing different emphases on them. I know some people think the idea of West Hampstead as any sort of village is risible, but it’s certainly a focal point both for transport and shopping/entertainment (more of the latter than the former these days). I’m pleased to see such specific recognition of the challenges facing Mill Lane, and a statement of intent to work on improving the street without sacrificing its character.

Amid all the bullet points and action plans, there are a few interesting comments in the overall vision and background section. Despite generally high levels of satisfaction among residents the plan recognises that different segments of the local population do not necessarily interact. Is this unusual, and does it matter? I would argue no it’s not unusual, but yes, it does matter. It matters because if we take one cut – age – 20-34 year-olds account for roughly half West Hampstead’s population, yet barely figure when it comes to deliberating local issues.

Although younger people here may not be long-term residents (largely, anecdotally, because they can’t afford to stay rather than because they don’t want to), it would be a mistake to think they don’t care. They also, inevitably, have some different priorities and sometimes a more forward looking outlook. It is to the council’s credit that one of the reasons they have involved me in this placeshaping process is because it gave them access to the views of younger people.

Although not explicitly discussed in the Place Plan, there is also something of an affluence divide. I heard at a recent local event that some of West Hampstead less well-off residents sometimes feel that they don’t fit in at lots of these community activities. Meanwhile, I wonder how many people in the “young professional” category avail themselves of the services offered by, for example, Sidings Community Centre. Just a thought. I hope that everyone feels welcome to attend #whampevents.

Do have a read of the document. There was plenty of cynicism at the first meeting I attended about the real impact such an initiative could have. At least by setting out clear actions, the council is saying “judge us on progress”, even if you think that many of them are a little vague, with a focus on “identifying”, “facilitating”, “monitoring”, “supporting” and “exploring” rather than more concrete words like “investing”, “building”, “changing”, or “upgrading”.

What have I missed since May 28th? Engels and the bridge builder