It’s nearly time for the second installment of the monthly NW6 Film Club, and this Sunday’s offering should be a nice contrast to Zero Dark Thirty, which we saw last time.

The film this time is Stoker – a film with a heritage as intriguing as its plot. 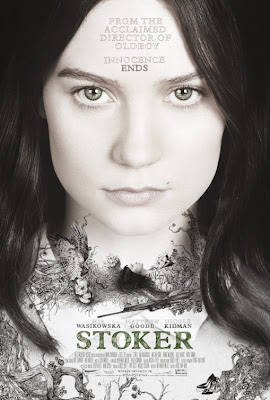 An American production by a Korean director, inspired by Hitchcock and Bram Stoker – it’s part horror, part romance, part family drama. It has an amazing cast including Nicole Kidman, and is getting great reviews. It sounds like it should have something for everyone!

The film is on at The Tricycle at 8pm on Sunday 3rd March.

We’ll meet up in the Bar Area at the Tricycle from 7:15 once you’ve got your ticket. There’s no need to tell us you’re coming – though a tweet is always welcome.

You can book through the Tricycle Box Office – we have a reserved block right in the centre of the cinema so mention “nw6 film club” if you want to sit with us (or don’t if you don’t!). It’s unlikely to be booked out so feel free to come along on the night as well.

The film is only 90-something minutes long so there should be time for a good post-movie discussion. If you can’t make it to the pub, please tweet your mini-review with the tag #nw6filmclub and we’ll compile them into an online meta-review.

As always, follow @NxNW6 for updates or the #nw6filmclub hashtag, and hopefully see you on Sunday.

What, where, when: Fordwych Residents Association Making money in Kilburn