West Hampstead is growing – that’s blindingly obvious to anyone who’s walked past the marketing suite promoting West Hampstead Square since the paper came down from the windows. How, therefore, do we keep some sort of oversight of all the plans and proposals so that the end result isn’t some hideous mish-mash of buildings that are under-supported by local services.

“Surely that’s what the Neighbourhood Development Plan is about?”, you ask, sensibly.

You’d think so, but Camden seems to want to something more formal on top of that, looking specifically at the “growth area”, which is around the stations. What role is left for the NDF then when it comes to policies in that growth area? It already has to dovetail with the borough plan, the London plan, and national planning policies. 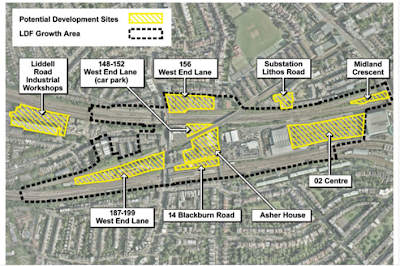 It is not at all clear how Camden’s Growth Area planning guidelines would fit in with existing plans for the area. Is this going to play into the hands of developers who’ll find the inevitable loopholes between the various documents and push through proposals that may not serve West Hampstead well.

At the last Neighbourhood Development Forum meeting, Richard Mileham from Camden planning, presented a few slides on Camden’s latest thinking. Judging by the the slides and the questions that followed, it wasn’t as illuminating as many had hoped.

The London Plan has identified this area as suitable for 800 new homes and 100 new jobs. Already, it’s expected that West Hampstead will deliver more than this – certainly in terms of homes. “Future change needs to be coordinated and allow stakeholders to be involved.” Er, yes.

There was one slide titled “Draft urban design principles”, which gives some insight into the sort of planning decisions at stake. Click the map below for a larger picture, but it includes a “major new public park” where the Audi garage is now. It also suggests moving Homebase nearer to the O2, and generally improving pedestrian access around the area. Clearly it is just a draft idea, but it suggests that the plans could involve some quite major reshaping, including of course the anticipated development of the O2 car park itself. 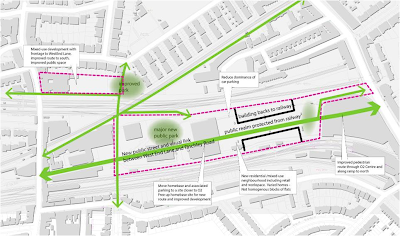 Specifically on green spaces, council officers said they would very much like to have residents’ views regarding a preference for many small spaces or fewer large spaces.

At the whampforum I held a couple of months ago the majority view was that large-scale development of the area was broadly welcomed with the important proviso that it wasn’t just cookie cutter blocks of flats, and that these were well designed spaces at ground level.

There is a set of objectives for this new growth area plan, each of which ties in with both the place plan and objectives of the current draft of the NDP, which makes one wonder what exactly this new initiative is adding.

The next steps apparently are to undertake initial feasibility and urban design work, then to engage the public on the options in the autumn. Once the option has been decided (and it’s really not at all clear what sort of options we’re talking about), then it could either feed into the NDP or be a separate, council-led Supplementary Planning Document, which seeks to clarify issues for a particular site or topic within a larger planning framework.

At the NDF meeting, there were a lot of questions asked, and answers given where possible.

What can we deduce from all this? The positive angle is that Camden is conscious of the pace and scale of change in West Hampstead and wants to be sure that firm guidelines and planning principles are in place. A less positive spin on it suggests that this is duplicating the work of the NDP, potentially undermining it. Actively incorporating ideas developed by Camden in this process into the NDP would lead to less confusion for residents and developers alike. Why muddy the waters?

So many salons, so few recommendations