Whether or not you’re a fan of the West Hampstead Square development, it’s already well underway. Some of you have been into the marketing suite, which showcases the fixtures and fittings of the apartments (vintage, despite the modern architecture), and plenty more of you have been gazing through the window at the rather large model of the development.

For people who haven’t yet realised how big this scheme is, the model (which lights up at night rather pleasingly) gives some idea. West End Lane is on the right. 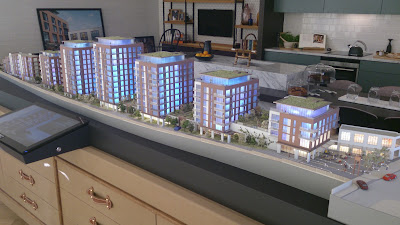 I had a word with Ballymore and it is willing to let whampers come up with names for each building. It’s competition time folks.

Get thinking
You need to come up with a name for each of the seven blocks in the development. Ballymore (not me) will choose the winner and there’s a caveat here – because these will be actual addresses of people’s properties, they have to be approved by the council too, so bear that in mind.

The winner will be the person who makes the most suggestions that are then used in the final building names. That person will win a three-course dinner for two with a tasting glass of wine paired with each course at The Wet Fish Café, and will be invited to the opening, along with knowing that they’ve helped to shape the built landscape of West Hampstead. Should a building name that has been submitted by other readers aside from the winner be chosen, they too will be invited to the opening.

There are no other parameters. I’m sure some of you will have some choice suggestions that clearly won’t get selected, and I’m braced for people who’ll say “we’re doing Ballymore’s job for them”, but why not look at the positives, help shape the place we live and bring these buildings into the community.

If you can’t come up with seven names, then why not suggest as many as you can – they may still get selected.

As I said, there are no other criteria – i will tell you that the marketing campaign is built around “Connections”, but that doesn’t have to influence you. I’ve already bagged Jimelda Towers by the way, in honour of our local thespian couple.

Send your suggestions to . Deadline is midnight September 2nd.