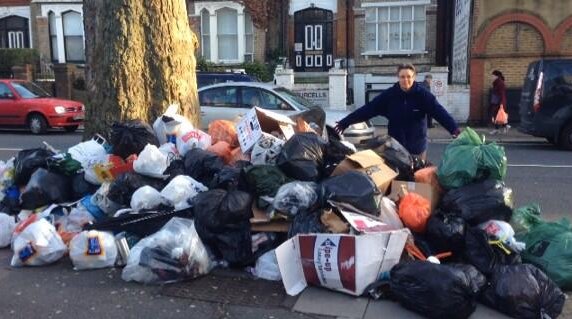 A ban on all estate agent boards on the commercial strip of West End Lane is looking likely. Three agents – including worst offender Cedar Estates – have committed to West Hampstead Life that they’ll remove all boards by the end of the week. To ensure they don’t creep back, read this article and sign the petition.

Free school campaigners, who now want a primary and secondary school, are on a collision course with Camden as both want to use Liddell Road for their schools.

Fly tipping problems seem to be creeping back in West Hampstead as a couple of spectactular photos demonstrate incuding this one (and the one below).

The tube strike caused a moderate amount of disruption, though West Hampstead station remained open much of the time as did the Met Line. Overcrowding was a major problem at Finchley Road though. Meanwhile it looked like some people taking to the roads had forgotten how to drive. The BBC interviewed some people waiting for the 139 bus at Waterloo, at least one of whom had forgotten how to walk. A routemaster was also pressed into service as a 139 as TfL laid on extra buses. Same again this week.

A man in a large chicken suit was spotted on West End Lane on Tuesday. It was for an advert for a bathroom company. We’ll have to wait to find the connection apparently.

The following day, West End Lane Books was the setting for a Carphone Warehouse advert.

Don’t miss out on Books, booze and bargains at West End Lane Books this Thursday. No tickets, just turn up for 20% off everything and free wine. You could even pick up a copy of local author Robbie Hudson’s latest novel The Dazzle, which has just come out in paperback.

As the petition to save the trees continues to collect signatures (will be interesting to see how many are local), the protestors held a “tree vigil” on Saturday morning. It wasn’t really a vigil, but more a little demo. Some wore masks.

Until Thursday you can eat at local participating restaurants and 30% of your food bill goes to local foodbank charities.

Dallas Buyers Club is the Film of the Week. Check out all the local listings.

Pete Roe + Twelfth Day + Laura Moody is Gig of the Week. Find out more and look at all the local music listings.

184 Broadhurst Gardens, formerly the deli Old Bridge, is under offer although the agent couldn’t say who was interested.

There’s a Growth Area workshop this Saturday run by the Neighbourhood Development Forum. Interested residents are invited to contact the organisers if they wish to attend.

24 of us went to Whampdinner went to Mamacita and were treated royally. I think the restaurant left a good impression, even on those who had been a little sceptical.

Tim Sommer, the German found guilty of murdering Professor Whitestick in 2012 in Goldhurst Terrace, was extradited from Broadmoor to Germany where he is wanted in connection with another death.

Rent rises in Camden were well below the London average last year, though of course absolute rents remain very high for the capital and above all four neighbouring boroughs.

The Property of the Month is a 3-bed house just shy of £1 million.

Tesco racked up £13,000 worth of parking fines on West End Lane in a year.

Don’t forget to share your thoughts on the area on the new mapping tool.

The Swiss Cottage post office will move into WH Smiths on Finchley Road at the end of the month.