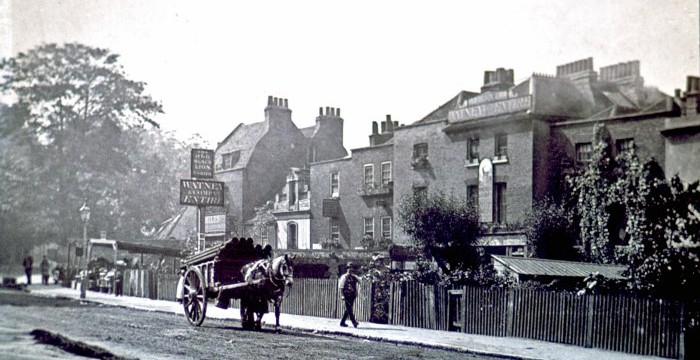 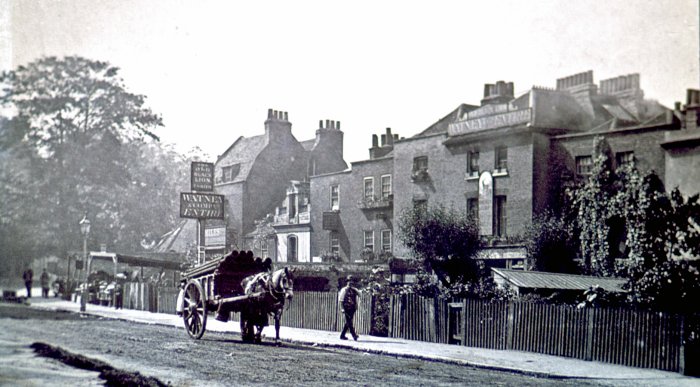 George Tombs was the station master at the Midland Railway station on Iverson Road. When it opened in 1871 the halt was called ‘West End’, the original name for the neighbourhood before ‘West Hampstead’ was adopted.

The station stood roughly where the garden centre and tyre workshops once traded, adapted from one of three large villas built before the railway was constructed. George married Ruth Simpson in 1869 and they had several children. At the outset the couple lived in Marylebone before moving to Bakewell shortly before the 1871 census, when George was working as a Midland Railway porter. He made a significant step up the career ladder when he was promoted to West End’s station master.

The birth of son Harry in 1874 shows the couple still living in Derbyshire but the family moved to West End shortly after. In August 1881, eight year old Harry was killed in a tragic accident. Two Watney’s drays, each drawn by three horses, were delivering beer to the Old Black Lion pub near West End Green. Several boys were playing nearby and a witness said he saw one of them give the driver apples in return for a ride. A few of the boys climbed onto the drays while others ran behind, as the wagons went off at a trot down West End Lane. Harry was swinging on a chain at the back of the first cart when he dropped his school slate. He tried to pick it up but fell onto the road and the wheels of the second dray went over him, crushing his head and stomach.

George Tombs was in his garden when he heard shouting. Poor man, he picked up his son and took him home. Harry died the next morning but not before he’d told his father he could have got out of the way, but had wanted to save his slate, which had a lesson written on it. The driver of the dray, 25 year old Robert Coulsey, was charged at Marylebone Court with causing the death of Harry Tombs.

The inquest jury at the Railway Hotel pub in West End Lane decided it was an accidental death and Cousley was released. In his turn, George Tombs was called to give evidence at inquests investigating railway deaths. In 1895, the decapitated body of 18 year old Arthur Edward Hudson, son of a Hampstead builder, had been found by the Midland tracks. Tombs told the court that the young man had ‘evidently knelt before an advancing train, as there were mud stains on the knees of his trousers. His hands were clasped.’ A verdict of ‘suicide during temporary insanity’ was returned.

The 1891 census shows two of George’s children employed by local industries. 22-year-old Lucy was a ‘wick cutter in a night light factory’: Samuel Clarkes’ pyramid night light factory was just a short walk away on Cricklewood Lane. Leonard, 14, worked as a ‘pianoforte stringer’, probably in Kentish or Camden Town, both centres for piano manufacture. As told by his father, Leonard was also a member of a cricket club who played on Fortune Green. In 1895, George gave evidence at an enquiry to determine the status of the open space. The locals claimed it as common land, a long established venue for games played by West End residents. Tombs said he’d been station master for twenty-one years and had known Fortune Green for thirty five. He used to walk up to the Green, ‘in former years every night during the summer to see the cricket. Quoits and rounders were also played.’

Then living in Sumatra Road, George died in June 1899, his wife Sarah died the following October. The couple are buried at Hampstead Cemetery Fortune Green, in the same grave as three of their sons.