More estate agents pledged to remove their boards from West End Lane – and indeed they began to be taken down. Do sign the petition if you want to ensure they can’t come back.

The trees on Ballymore’s West Hampstead Square site were removed, despite the petition to save them. One tree on Network Rail’s land adjacent to the site has been granted a Tree Preservation Order.

Preliminary drawings for the new Overground station were released. Expect more details over the coming months. 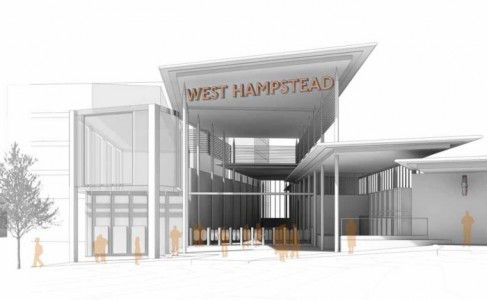 An update from Waitrose, which now plans to open its Little Waitrose “in late summer” (in the Pizza Express site, if you didn’t know).

The Show is this week’s Gig of the Week – check out all the other live music coming up in the area.

The new Thameslink trains were unveiled… in model form. You’ll have to wait a couple of years for the full-size versions.

Kids from Emmanuel School had a go at defining love.

What did our new book reviewer make of Hampstead thriller Deep Shelter?

Tom’s been eating out again – this time at The Alliance.

West Hampstead has largely escaped unscathed from the bad weather, but a wall did collapse in St Cuthbert’s Road in the strong winds of Friday night.

Meanwhile, the wall that collapsed last week at the bottom of Holmdale Road gardens should be replaced “brick by brick” say residents.

A busy WHAT meeting on Monday discussed air polllution – more on this in a few weeks.

Some graffiti on Gondar Gardens caught the media’s attention.

Whampbooks was a great success again – thanks to West End Lane Books for hosting and discounting!

Her is the Film of the Week. Full local listings here.

The Railwayman: Life and times of George Tombs