In the 2012 London Olympics, Nicola Adams won Britain’s first gold medal in women’s boxing. Until recently, however, boxing was not seen as a sport for women. More than 60 years ago, The Kilburn Empire, which was at the southern end of the High Road – where the Marriott Hotel is today, played an important part in this story. 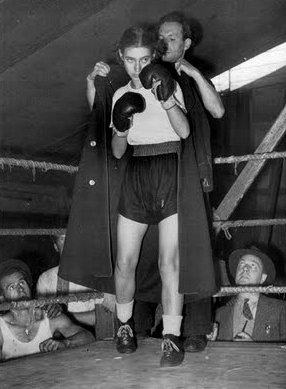 In February 1949, there were numerous press reports about “battling Barbara Buttrick”, a boxing typist from Hull who was due to fight Bert Saunders in an exhibition match at the Kilburn Empire. The bout was scheduled for March 7th, and she would become Britain’s first professional female boxer. But the fight was opposed by the Variety Artists Federation. Defiantly, Nat Tennens, the licensee of the Kilburn Empire said, “the show goes on”. Barbara’s promoter Micky Wood said, “There are women lion tamers, snake charmers, and trapeze artists. Why should this girl not box? She lives for boxing.”

After continued pressure from the Variety Artists Federation and the British Boxing Board of Control, Tennens wrote to the London County Council saying the match was cancelled and that instead Barbara would now give an exhibition of training, shadow boxing and punch-ball work. Further attempts were made for “Battling Butt” to fight female opponents at other venues in 1950.

She toured the country and Europe on the carnival circuit challenging women to fight. “I liked it,” Barbara said, “You worked hard but it was better than a nine-to-five job.” Born in North Yorkshire in 1930, Barbara, who was only 4’11”, was called The Mighty Atom of the Ring.

She found a new trainer, Len Smith, who she eventually married and they moved to America in 1952. In 1957 Barbara became the first women’s world boxing champion. She was delighted and very proud when, in 2010, the Florida Boxing Hall of Fame added her to its roll of honor – alongside Muhammad Ali.

Watch a 3-minute interview with her from 2013 from Adjust Production – she’s still got some moves! And below, some footage of Barbara in her youth.