Nicholas Winton, who was instrumental in getting more than 650 children out of Czechoslovakia right before the outbreak of WW2 was born in West Hampstead. He’s still alive today and many would like to see him be awarded the Nobel Peace Prize. 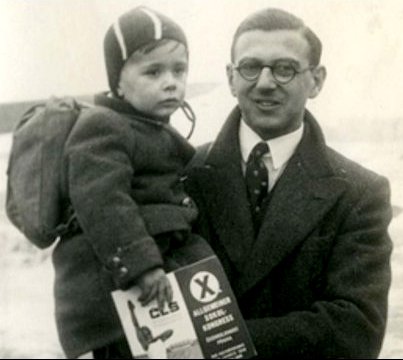 Nicholas Winton was born Nicholas George Wertheim. His family came from Prussia, (part of the German empire) but by 1871, his grandfather was working as a clerk and living in Manchester. By 1895 he had moved to ‘Stonecroft’, 5 Cleve Road, where the family remained until 1933. His son Rudolf, a bank manager, took over the house in the early 1900s and Nicholas George was born on 19 May 1909. With anti-German sentiment on the rise, the family changed its name to Winton in October 1938. Nicholas lived briefly at 5 Belgrave Road Marylebone and he was at 20 Willow Road Hampstead by 1938.

In December 1938, aged 29, Nicholas Winton was getting ready to go on a skiing holiday in Switzerland when he received a phone call from his friend Martin Blake who said: ‘Cancel your holiday and come with me to Prague. I have a most interesting assignment and I need your help. Don’t bother bringing your skis.’

When Winton arrived in Prague he was asked to help thousands of refugees who were enduring appalling conditions in camps. That October, Hitler had annexed the Sudetenland, a large part of western Czechoslovakia. On the night of November 9th, there were violent Nazi attacks on German and Austrian Jews. This was Kristallnacht, ‘the night of broken glass’. Almost a hundred people were killed and more than 30,000 were put in concentration camps. Winton and many others believed that war was inevitable.

After Kristallnacht, the British Government agreed to support ‘Operation Kindertransport’ to help children at risk. The Refugee Children’s Movement organised extensive fund raising and on 2 December 1938, the operation began in Germany and Austria. Eventually almost 10,000 children were rescued and given shelter with foster parents in Britain. But the scheme didn’t extend to Czechoslovakia.

When Winton was told there was no organisation in Prague to deal with refugee children, he decided to take matters into his own hands. He found that to get an exit permit, each child had to have a family willing to look after them in Britain and £50 (a large sum at the time), had to be deposited with the Home Office. Applications rapidly increased from anxious parents, and Winton who’d started in a small way using a dining table in his Wenceslas Square hotel, had to rent an office.

Leaving two Englishmen to run the Prague end, he returned to London, working by day at the Stock Exchange and devoting evenings to his evacuation plans. He was helped by his mother, his secretary and a few volunteers, who fundraised and found foster homes. But the Government’s response was frustrating, as Winton explained: ‘Officials at the Home Office worked very slowly with the entry visas. We went to them urgently asking for permits, only to be told languidly, “Why rush old boy? Nothing will happen in Europe.” This was a few months before the war broke out. So we forged the Home Office entry permits.’

On 14 March 1939, the first children left Prague by plane for Britain. This was followed by seven more rail transports, the last leaving on 2 August, bringing the total to 669 children. On 1 September, the largest group of 250 children left Prague but on the same day Hitler invaded Poland and all the borders controlled by Germany were closed. Winton said: ‘Within hours of the announcement, the train disappeared. None of the 250 children aboard was seen again. We had 250 families waiting at Liverpool Street that day in vain. If the train had been a day earlier, it would have come through. Not a single one of those children was heard of again, which is an awful feeling.’

After the war Winton, who was a very modest man, didn’t tell anyone, not even his wife Grete about his rescue efforts. In 1988 Grete found a scrapbook in their attic with photos and names of the children and Nicholas told her what had happened. Grete shared the story with Elisabeth Maxwell, a Holocaust historian and the wife of Robert Maxwell, the Czech born newspaper magnate. The amazing story appeared in Maxwell’s newspapers and Winton appeared on Esther Rantzen’s ‘That Life’ TV programme and some of the children, now adults, appeared with him.

‘Winton’s children’, as they call themselves, included the film director Karel Reisz who made ‘The French Lieutenant’s Woman’ and Vera Gissing who wrote ‘Pearls of Childhood’ and was a co-author of ‘Nicholas Winton and the Rescued Generation.’

In 1993 Nicholas Winton was awarded an MBE and in 2002 he was knighted by the Queen for his services to Humanity. Today he lives in Maidenhead where he celebrated his 104th birthday in May 2013. There is a campaign to nominate him for the Nobel Peace Prize.

Several films have been made about Nicholas Winton and are available on YouTube.

What have I missed since March 31st