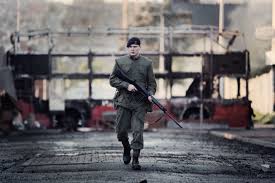 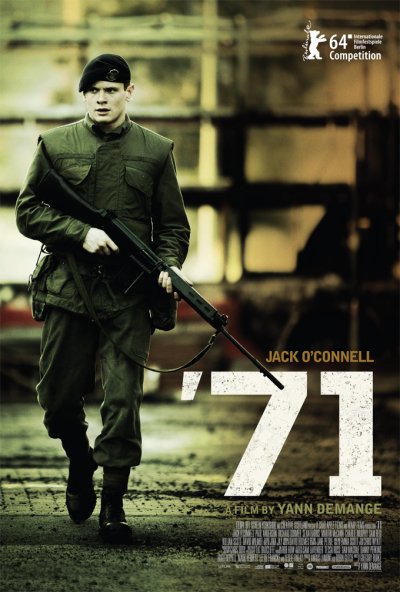 After the last month’s Film Club movie – the wonderful Pride – we are going to see another British film dealing with a troubled period of recent British history.

The movie is ’71 and whilst it’s probably not going to have the feel-good factor of Pride, it’s getting spectacular reviews (97% on Rotten Tomatoes) and great audience feedback.

The film is set in Belfast at the height of The Troubles and follows an English paratrooper as he fights to survive, alone, in a seemingly hostile land.

Don’t worry if you’re not an expert on the politics of Northern Ireland. By all accounts this film avoids big “P” politics and uses the real-life situation as the backdrop to a suspenseful thriller that should have everyone biting their nails. With great performances and superb direction from first-timer Yann Demange, this is lining up to be one of the most critically acclaimed films of the year so far:

“This taut drama about a British soldier caught behind enemy lines in Belfast is a cracking debut” The Guardian
“’71 hurtles along, visceral and daring.” This Is London
“This is a tense, gripping thriller that combines real-world relevance with high-concept entertainment.” Empire

The film is on at the slightly earlier than usual time of 5:30 on Sunday 19th at the Tricycle Cinema. We’ll meet in the bar from 5pm and there should be plenty of time to chat about it over a drink afterwards.

Hope to see you there,

What have I missed since October 6th?