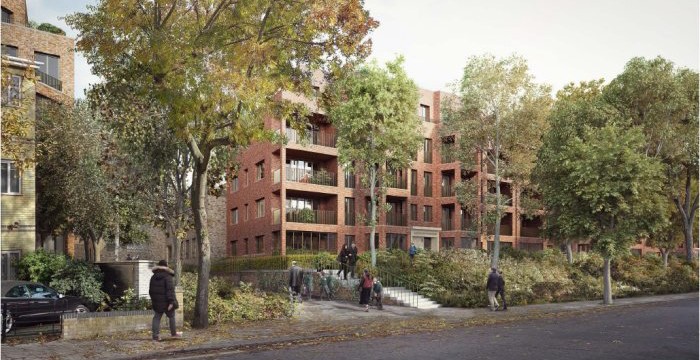 As West Hampstead Life reported a few weeks ago, Camden Council refused to disclose the finances related to the Liddell Road development [its scheme to develop the existing industrial estate, which it owns, in order to build a primary school there funded by the sale of housing and offices on the same site]. The council claims these numbers would let private developers know how the council values land, which would undermine it in future negotiations.

Leaving aside the fact that developers can employ armies of surveyors who are well versed in development economics to work such things out, the fact is that the inputs for development models such as rents, comparable sales prices, ‘allowable profit’ levels and building costs are widely available. The NDF therefore decided that in the absence of disclosure from Camden it was worth trying to do the sums itself. The results suggest that the council may make an additional £10 million from the development.

To help with its calculations, the NDF had advice from someone working in the property industry. Development economics are complicated and it is hard to imagine that all the councillors who sit on the planning committee – and thus who will vote on the scheme – have a perfect understanding of them. The general public certainly do not. To help the councillors, and as part of its legal obligations, the council does refer the scheme to an independent assessor. Members of the planning committee will see the assessor’s report before the committee meeting, though even here some financial figures are also redacted.

We would argue that in cases such as Liddell Road, where the council is both developer and approver as part of its Community Investment Programme, it is even more important that numbers are clear and transparent.

Lets do some maths

The actual calculations are relatively simple, and although we have had to make some assumptions, we feel that broadly we should be on the right lines. If Camden would like to correct us on any of these numbers, we would very much welcome their input.

Camden has explained that the sale of the flats and the office space will pay for the building of the school, and deliver a surplus. That surplus was originally £3 million but, in the final report to councillors, it’s been reduced to £1.9 million as the costs of clearing the land appear to be higher than anticipated.

a) the value, to a developer, of the land with full planning permission for flats/offices
b) the costs of building the development + various other associated costs (including the developer’s profit margin)

This leaves a residual land value, which is the amount Camden can sell the land for to a developer and is what they will use to pay for the building of the school.

How much is Liddell Road worth to a developer?

The planning application is for two residential blocks and one office block. Lets take each in turn.

Housing
The application is for 106 flats (40 in a tower block and 66 in a mansion block) of which 4 are affordable. In total this is 10,247 sq m of floorspace and 319 habitable rooms. But what are they worth?

A good comparison is to look next door.

Adjacent to Liddell Road is 65 Maygrove Road (formerly Handrail House, now ‘The Residence’) which is currently being turned into 91 flats. These flats are already on the market with asking prices starting at £650,000 for one-bedroom flats and £780,000 for two-bedroom flats.

Therefore, the estimated total sales value of the housing is £76 million

Office space
The application also seeks to build 3,727 sq m of office space. Based on comparable spaces in Queen’s Park and Camden we estimate an expected rental of £295/sq m.

The expected annual rental income from the office building would therefore be £1,097,000. According to commercial property estate agent Cushman & Wakefield, an office building like this could be sold for £20.5 million (based on a standard yield of 5.25%).

Now we need to look at the costs, which include construction costs, the developer’s profit and other costs.

Build costs
According to the BCIS (Build Cost Indexation Service) of the Royal Institute of Chartered Surveyors, an inner-London mid-height housing and office development costs about £2,750/sq m (including fees), though our research suggests this is on the high side for a development like Liddell Road.

To assess other building costs, we have drawn on data from bank BNP Paribas’ introduction to development economics seminar. Landscaping would cost about £1 million, infrastructure costs (roads, pipes) £5 million and a 15% contingency of £6.5 million would be normal.

The developer also has to make money and is allowed a 20% profit margin. For a scheme like this, we understand the margin is likely to be based on costs not sales, which gives us a figure of £10 million, but this varies from development to development and is subject to negotiation.

Two other costs can be deducted: financing and marketing costs. Interest rates are very low at the moment but at a rough estimate these would total £5 million. There are also marketing costs to sell the development (those swanky ads in the Evening Standard) generously estimated about at 5% of gross sales, so a further £5 million. Giving total ‘other’ costs of £20 million.

What does this leave?

If gross sales = £96.5 million and total costs = £70.9 million, this leaves a gross residual land value of £25.6 million. This is what the council might expect a developer to pay for the land and what will fund the school

Normally, councils try to capture some of this uplift and get developers to include extra affordable housing and section 106 agreements for community facilities. The situation here is slightly more complicated, but in simple terms, the equivalent payments as set out in the planning report seem to total less than £200,000 (not all are costed, so precision is difficult), which is extremely low for a development of this size. As of April, when the new Community Infrastructure Levy comes into play, a private developer would be expected to pay £2.6 million on a housing/office development like this.

This £25.6 million (£25.4 if you want to strip out £200,000 for section 106-type payments) is supposed to finance the new school on Liddell Road and leave a £1.9 million pound surplus to be invested in schools elsewhere.

What does it cost to build a school?

Camden has said it will cost £13.4 million to build the school and has acknowledged that some of that will come from the £6.7 million central government grant the council received, though have not publically said how much.

According to the BCIS, the cost of building a new primary school of more than 2,000 sq m in inner London is £1,866/sq m. This is in line with the National School delivery cost benchmarking report of June 2014, which gives a figure of £2,170/sq m.

Going with the more expensive figure would give a cost for the school, which is 2,392 sq m, of £5.2 million. It is not clear therefore, how Camden has come up with a cost of £13.4 million – more than 2.5 times the national average.

Even if the school does cost £13.4 million and the council decides not to use any of the £6.7 million allocated for new school places here, our calculations suggest that there would be a further £12 million left over. Deduct the £1.9 million surplus that the council states it wants to make to fund other improvements to schools in the boroughs, and there’s still £10.1 million unaccounted for.

The property expert we spoke too clarified that his view “is given as a personal opinion on the market but is not an official valuation. That said if a full valuation was commissioned from a valuation surveyor, I am sure the view would not differ and in fact they might even come up with a higher site price’.”

The NDF would very much welcome Camden pointing out anywhere where our assumptions are wrong. Clearly the build costs and the sales costs have the biggest impact on the overall numbers, so it would be very interesting to know if Camden’s figures differ significantly from the benchmarks that we have used.

What have I missed since February 23rd