As we watch David Cameron give his thank you speech having delivered a 22,000 majority in Witney, the situation in Hampstead & Kilburn is looking close and people are slightly tense. 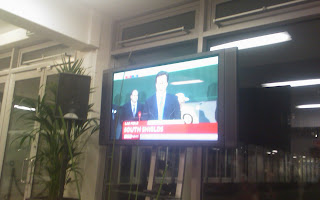 There are a few issues with ballots that have wrongly ended up in Brent, there’s an issue with the constituency map up on the screen (it’s a Camden map that doesn’t show Kilburn, but is being fixed), but the main count has begun and it’s too close to call.

Have we all got caught up in a local bubble and missed the bigger national picture – the Liberal Democrat surge clearly hasn’t delivered anything meaningful across the country (although Nick Clegg may well still have a very important role to play). Does this mean that Ed Fordham’s campaign on the ground will have been for nothing? It’s going to be close and, as I just reminded Chris Philp, the Conservative candidate’s name is the last on the ballot and will be the last to be called – and thus the result won’t be known until that moment. The H&K 1-2-3 could be a bit of a surprise.

Where are we again? The final results in Hampstead & Kilburn