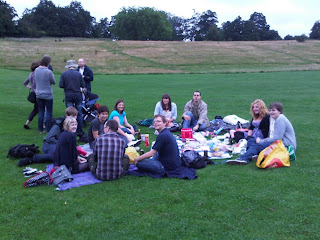 Once again, whampers proved they are a heroic lot as more people than expected braved the extremely dubious weather on Saturday afternoon and came to the picnic on Hampstead Heath.

The clouds looked ominous and we did have to endure a few spells of drizzle, but in the best British tradition we stood firm.

Rugs were spread on the grass and inquisitive dogs fended away from the various picnic delights everyone had brought. Yes, a few umbrellas went up as well, but thankfully the rain never amounted to much. Whampstalwart, @gitfinger turned up with a case of beer and more importantly his baby son, who became officially the youngest whampgatherer. 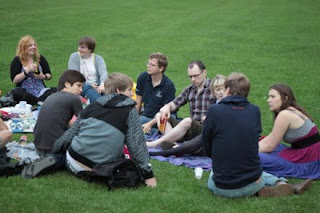 Alongside the familiar faces, such as @blakeconnolly @Cyburn and @mayfield22 who, like @gitfinger haven’t missed a whampgather it was great to welcome some international newcomers such as @DC_Londonista and @ECinLondon, @garymc and @hsheeran, and @annfenech, as well as a healthy dose of other first-timers and enthusiastic regulars. 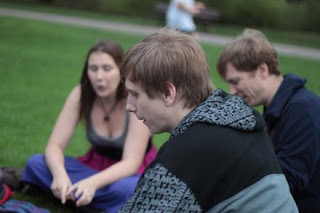 After handing out the eco kits from @greentomatoNRG, we decided that we’d been stoic long enough and the pub was calling. While some people headed off, we picked up a few more back in West Hampstead including several new faces, and the drinking continued well into the evening.

Overall, with a turnout of 26, summer whampgather had been a success despite the weather and it was great to be able to say hello to lots of new faces and demonstrate that the whamp community really is as friendly and welcoming as it should be.

The next whampgather will be in early December. Keep an eye out on Twitter and the blog for updates. Look forward to seeing you all then.