You all know that we raise money for The Winch. At the last Whampgather all the money we raised from the raffle – which was just shy of £600 – went to support the youth charity’s drama group this term.

On Tuesday night I joined the Mayor of Camden, some parents and Winch helpers, and saw the group’s end-of-term production in one of the theatres at Central School of Speech & Drama.

We were treated to a Winch version of Britain’s Got Talent complete with nasty judges, entertaining advert breaks, and some fantastic performances by the young people. There was singing, dancing, comedy and a grand finale performance of the Harlem Shake. 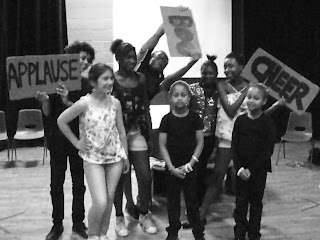 You could see the confidence of the performers growing even while on stage as the nerves dissipated. They knew most of the audience members, but the stakes were raised by having the Mayor, replete with the chains of office, in the front row.

Aside from keeping us entertained, these drama workshops are enormously important in giving kids self-confidence as well as building their team skills such as listening. Even getting some of them to sit down for a couple of minutes was a challenge at the start of the term apparently, yet here was a controlled performance that the young people clearly enjoyed as much as we did in the audience.

A huge thank you to all the local businesses who donated raffle prizes and to all of you who bought raffle tickets at whampgather. You made it possible for the hardworking and committed staff and volunteers at The Winch to give these kids a creative outlet and an opportunity to develop a wide range of skills that will benefit them enormously as they go through life.

New plays and new seating policy at the Tricycle