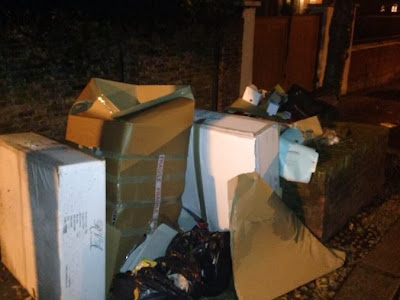 Whether it’s due to all the local twitter and website activity, or whether our councillors have managed to put the squeeze on Camden, we finally have some action from the council on the fly-tipping blight. But what about the problems being caused by the normal rubbish and recycling collection (or lack of it)?

Here’s what the council says about “Clean Camden”, its new campaign:

We’re taking a tough approach to those people who continue to litter, dump their waste or do not clear up after their dog.

We know that you find littering, dog fouling and fly-tipping disgusting and anti-social.

Through our Clean Camden campaign we want to change this bad behaviour through education and enforcement. We need you to help by being our eyes and ears and reporting issues to us so that we can crack down on these filthy enviro-crimes.

Ignoring the crime against language that is the phrase “filthy enviro-crimes”, lets think this through.

Some have already dismissed the scheme as Camden passing the buck onto residents, expecting us to be on constant alert for someone carrying a mattress down Mill Lane, or surreptitiously dumping bags of construction waste on Minster Road. Oddly enough, quite a lot of these activities seem to happen under cover of darkness – almost as if the perpetrators didn’t want to be seen? I know, right?

@camdentalking @WHampstead So basically you’re just asking for us to grass people up, which we’re already doing. You need to be proactive!
— Daniel W (@damawa42) November 4, 2013

It’s not unreasonable to ask for some cooperation from Joe Whamper; we understand the budget constraints (even if Labour’s political opponents argue the council has its priorities wrong) and enforcement teams can’t be everywhere.

However, realistically, catching the big offenders is going to take more targeted action. Is that more expensive? Yes. That’s why it has to be targeted. But we all know where the stuff is being dumped; and as dumping is illegal and comes with a fine, there’s even some way to recoup some of the cash – sort of how parking enforcement works.

Our education and enforcement team are patrolling at hotspot areas and will catch and fine those offenders who:

I’m not clear what the education element is here – yes, maybe there are some people who don’t realise they shouldn’t put a mattress out in the street, but the biggest “fithy enviro-crimes” [shudder] are committed by people who surely know all too well what they’re doing. Less education, more enforcement please.

The fine for littering and for not clearing up after your dog is £80. The maximum fine for fly-tipping is a slightly staggering £50,000, though as I reported, Camden very rarely prosecutes.

If you do happen to see someone furtively leaving an armchair lying around or, as Camden puts it, “if you spot a place or person that is undermining our attempts to rid the borough of dog fouling, littering or fly-tipping”, then you can ring 020 7974 4444 (that’s the standard Camden contact number) or report them online.

Camden’s also going to be “calling on residents to take part in and organise clean up events.” I think many people will be telling Camden into which bin they can stick their clean-up events.

Business waste
Residents may not be aware that businesses have to make separate arrangements for waste collection – their business rates don’t cover this in the way that council tax does for domestic waste.

Instead they have to make their own arrangements (and pay for them) with registered waste collection companies.They must also “stop waste escaping from [their] control, by storing it safely and securely.” There have certainly been examples of waste around West Hampstead that is clearly business waste – either from construction projects or restaurants. The latter should be reasonably easy to identify (and they are unlikely to dump it outside their own premises).

Larger items that do not form part of business’s day-to-day waste can be collected by the council for a charge.

But what about Veolia?
While the Clean Camden campaign is a small step in the right direction for countering littering and fly-tipping, there is another problem. At least in this part of the borough, the rubbish and recycling collection is far from perfect and this is creating problems too. When the bin men don’t collect the rubbish and bins or bags are left on the street, it’s both unsightly and unhygenic, but also gives the impression that this is acceptable behaviour.

@camdentalking, is this the way our streets should look after rubbish collection? pic.twitter.com/jp6y5KP38p
— Nicole Dunn (@_nicoledunn_) November 6, 2013

Sick of the bloody bin men they make more mess all this council tax for nothing @camdentalking @WHampstead pic.twitter.com/EUFC4uz48W
— Mr Blue™ (@allyrangers) November 3, 2013

Solving the area’s rubbish problem needs both action on the fly-tipping and action on Veolia (the contractor) to improve performance. I can imagine this is happening behind the scenes, but I think locals would like to hear a bit more about that – including what sort of penalties Camden can impose on Veolia if it misses targets (surely it has targets?).

Here’s what Camden cabinet member Phil Jones said about Veolia in response to queries by WHAT:

Aside from the fact that it really shouldn’t take more than a couple of weeks to get familiar with new rounds, this doesn’t address the problems that locals are reporting every week about missed collections, or simply missed bins.

@WHampstead doesn’t explain why my recycling bin has only been emptied three times in the last six weeks though #sloppy
— Richard Milestone (@richardmileston) November 2, 2013

Worryingly, fly-tipping actually includes putting out a bag of rubbish when it’s not a refuse collection day. So, if you put your bin out and it’s not collected and you’re away, you may find yourself accused of fly-tipping!

To find out more about Camden’s new crack-down, come to the Area Action Group meeting next Wednesday when one of the street environment officers will be explaning more – and probably copping some flak.

Grill your councillors on local issues

Trees: Will they stay or will they go?