Alan Livingstone is one of those people you immediately like. He’s 16 – quite cherubic – and an apprentice mechanic at West Hampstead Motors. It was the 64th garage he tried for a position. Apprenticeships are hard to come by, even when the government gives employers a contribution for taking them on.

West Hampstead Motors has committed to keeping Alan even if it is forced to move out of Liddell Road as part of Camden’s redevelopment proposals.

I asked Alan if he was local. “Archway,” he replied.

“Yes”. He grinned. Hardly the world’s most glamorous commute, but we all know how well connected West Hampstead is. If West Hampstead Motors moves to Brent Cross, then maybe Alan will be lucky and get an even longer ride on the bus of dreams. But what if it has to move somewhere else? Alan didn’t seem to fancy the idea of working in the type of “managed workspace” that the council is planning to put into Liddell Road. He’s an apprentice, not The Apprentice.

Alan was one of several people I met last week on the industrial estate. Branko Viric, Alan’s boss at West Hampstead Motors showed me round. He’s spearheading the Save Liddell Road campaign, which is trying to get Camden to reconsider its proposal to redevelop the site for a primary school, private flats and office space.

This may be a futile cause. Sadly, in a dense urban environment and in these times of austerity, it’s rarely going to be possible to please everyone. The school places are needed, but the traders on the estate are finding it hard to see their future somewhere else and don’t feel the council – their landlord – has explained clearly enough why this is the only solution, or done much to soften the blow.

Park Royal?
Thus, the mood of most of the people I spoke to on the site was more one of despondence than anger, frustration more than fear. These are businesses that have mostly been on the site for more than 10 years, and in some cases 20 years. They have local clients and yet there is nowhere local for most of them to move to. The words “Park Royal” and “Brent Cross” kept coming up, generally with a sigh.

Relocating will mean building a new client base, and in many cases finding new staff. The number of people employed on the site is one of the areas where Camden and the traders don’t see eye-to-eye. By Camden’s reckoning, 80 people work on the site. The traders believe it to be 250. The truth is presumably somewhere in between, but the real number is moot when Camden claims that the redevelopment will deliver more jobs than it takes away.

Even if that did turn out to be true, are they the right types of jobs? Where will the Alans of West Hampstead go for work? A few doors down from Liddell Road is Handrail House, which itself is being redeveloped after agents failed to find office tenants after two years of trying.

Ironically, the development proposal for the Iverson Tyres site, also very nearby, has had a light industrial use forced upon it for its one commercial unit, even though the Iverson Tyres company want an office space there and, with flat directly above it, it would suit an office space. At least perhaps one of the smaller Liddell Road businesses might be able to move in there. 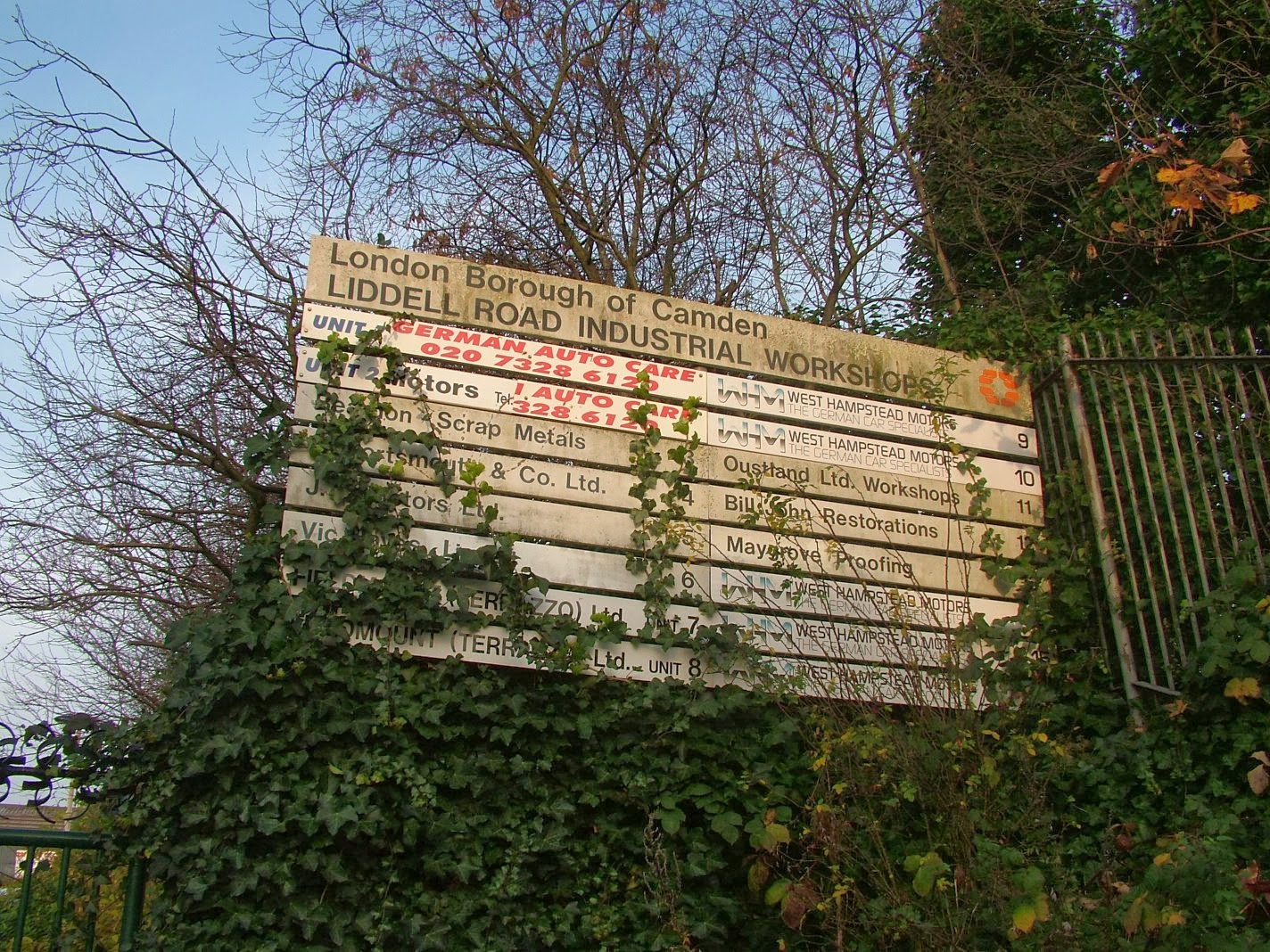 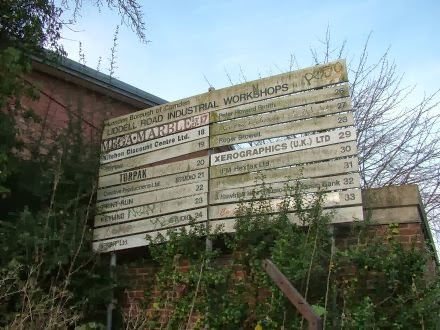 One or two of the businesses are more suspicious, there’s hushed talk of social engineering, and the most cynical believe the school will never materialise and the land will simply be cleared for housing.

That’s all too conspiracy theory for me; but when the traders complain about the lack of transparency from Camden, there’s a ring of truth about what they say. “We’re passed from one person to another,” said one trader – he’s wary to be identified in case the uncertainty spooks his customers. “Everyone tells us we need to speak to someone else if we want to find anything out.”

Something’s not right
In Camden’s cabinet meeting at which this decision was made, Cllr Theo Blackwell emphasised that he believes the council takes “extraordinary steps to reach out to people”, implying that the council had behaved in an exemplary manner in dealing with the community and businesses.

There’s a mismatch here, as elsewhere, between the council’s claims and the reaction from those affected. Some discrepancy is perhaps inevitable – people with different agendas perceive situations in different ways; when those discrepancies start to build, then they become worth examining more closely.

The trader who has been passed from pillar to post says that the council have been unclear about what would happen if businesses don’t sign the end-of-lease agreement, although they have been clear that contesting the decision would be a very expensive option.

“I am unaware of any relocation assistance from Camden,” he added. “In September I was told that a consultant had been commissioned to work with businesses and would visit Liddell Road, but we’ve seen no-one.” He acknowledges that an agent, Lambert Smith Hampton, has provided a list of possible relocation properties, although none of them are of a comparable size or rent for his business.

Ironically, he also recently received a letter from Camden’s head of economic development, which said “As part of our commitment to support growth… the Council has partnered with Funding Circle to provide finance to lend directly to businesses like [business name removed], to stimulate growth and create employment right here in the Camden area. Meantime, I’d like to take this opportunity to wish you every success with your business and hope that you achieve growth and success over the forthcoming years.”

These sort of bureacratic cock-ups are par for the course at any large organisation, but they don’t help businesses feel any better about the way Camden is managing their “transition” (as management consultants would call it) off the site.

Vacant stares
Mark McKenna, from Swiss Cottage, runs Dynergy out of one of the end units. It’s a distribution business and Liddell Road’s location was the big selling point for him. He’s unusual in Liddell Road as he’s a new boy – he’s only been there a few months and knew about the plans when he signed the six month lease. What he found odd was Camden’s reluctance to let the unit, despite there still being more than a year from when he took it to the proposed redevelopment. “They said there were no vacant units, but I’d come and peered through the windows – this was definitely vacant.”

We sat in Salaheddine El Bahloul’s office at German Auto Care – Branko’s chief competitor, but the camaradarie on the estate is evident. He is more angry than most about the plans, and questions the whole notion of the need for the school. He also points out that while there are other garages in the area – especially under the railway arches around Kilburn – he and Branko both offer much easier access, which lots of customers appreciate.

Jobs are already evaporating
The estate isn’t all men and vehicles. Vicki Culverhouse runs Curtain Concepts, a bespoke curtain makers and fitters. They do a lot of work for Heal’s. She’s been on the estate for 10 years, but was in St John’s Wood and Kensal Rise before that – her customer base is definitely local. “The children of our early customers are now coming to us,” she says proudly.

“I employ two people now, there were more but with all this uncertainty there doesn’t seem any point in hiring replacements.” It’s a story I hear elsewhere. It would be good to know whether Camden took this into account when calculating jobs here – some have already been lost because of this decision hanging over them. Vicki also works with people off-site on a freelance basis and she is their main customer.

The employment reports specifically states it did not look at the broader supply chain of businesses, in fact it admits that there is a lot of data is does not have, and David Tullis, Head of Property Services talked in the cabinet meeting about having spoken to “a number of businesses” to estimate employment numbers, rather than all businesses. The report says:

Data relating to the socio-demographic profile of the commercial tenants and their employees does not exist and/or is not available. Furthermore, research undertaken by the Council to identify the impact of the Council’s CIP on local business and employment in the borough did not collect or analyse any equality data relating to the age, ethnicity, ability, religion or gender of the business owners, their workforce or supply chains in situ on CIP sites (Ref: CIP Employment Study – April 2013). The above research did, however, report anecdotal evidence that entry level jobs within the larger businesses occupying CIP sites are generally filled by migrant workers. No further information is available. (link: http://democracy.camden.gov.uk/mgConvert2PDF.aspx?ID=31213 page 6)

The workforce on Lidell Road is actually quite eclectic. Sam Thomasson runs Fieldmount Terrazzo Ltd, an Italian tiling specialist. He’s well-spoken and laconic. Although his company occupies one whole unit, perhaps he’ll find it easier to downsize, he suggests. He employs four people and another eight as and when. He takes his leave, to check his friendly dog isn’t playing in the traffic on Maygrove Road.

Moving isn’t easy for some people. There’s an industrial-scale t-shirt printing business on the estate. The company moved its presses from one unit to the neighbouring unit a couple of years ago – it took the presses 12 months to settle to their new home and work perfectly. 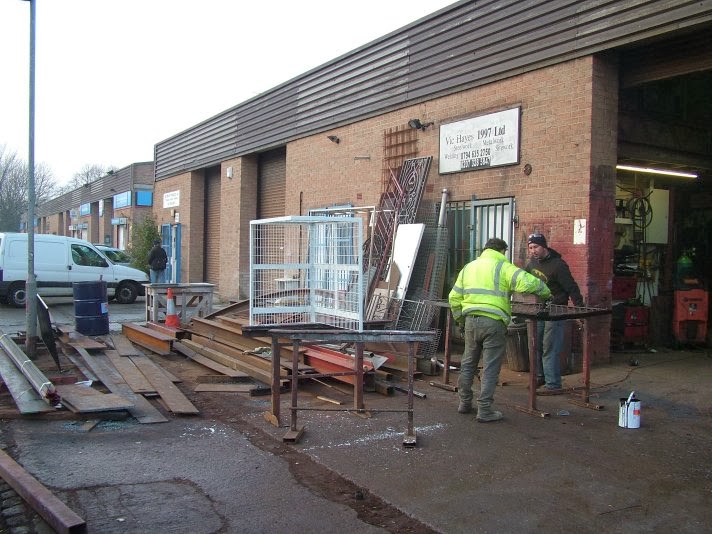 Before heading back, we catch a few minutes with Andy from one of the two adjacent metalworks businesses. He seems resigned to it. I ask who his clients are. “Property developers, architects, builders. We produce custom-made balconies, that sort of thing, steel beams; no-one seems to like walls any more in their flats” he says.

One wonders whether any of Andy’s steel beams will be used in the flats to be built on the site. He won’t be a local supplier any more, so probably not.

Coup de grâce?
Camden can slap itself on its back all it wants. Its achievement is impressive – it’s delivering a capital investment programme despite steep funding cuts. It’s also good to hear some members of the cabinet – notably Cllr Valerie Leach – be extremely balanced in their comments about the Liddell Road scheme, while some others seem to see only the positive news story. Cllr Leach specifically noted the impact on businesses saying that “We are in the process of arranging meetings with you.” Lets hope they happen.

The Liddell Road traders may have become an inconvnenience, but the least they deserve, after so many years trading, is to be treated with a bit of respect by the council that has been their landlord. In the meantime, we’re still waiting for that job breakdown data from Camden.