As all bright schoolchildren know, King Canute didn’t believe his regal powers could stop the tide. In fact, he got his feet wet precisely to prove this point to his obsequious courtiers.

Still, to this day “Canute-like” is used to describe people who battle on against an inevitability. This must be what the local campaigners behind the Save the Trees petition feel like. Since January 16th they have been tweeting seemingly non-stop to anyone and everyone in the area, pleading that they sign the petition. They are trying to convince Ballymore and Network Rail to spare the lives of the trees that are destined for the chop on the West Hampstead Square site.

The petition has had some success, attracting almost 600 signatures to date. However, any stay of execution for the trees seems extremely unlikely.

Readers who’ve been following the story for some time will recall that developer Ballymore has decided to chop down 27 of the 32 trees originally identified as being on its building site. This is in line with the planning permission it was granted, despite its own tree survey suggesting that some of the trees could be retained.

Ballymore did realise that it could make five trees Network Rail’s problem as they were just off its land. Network Rail, which plans to redevelop the Overground station next door, is expected to remove those final five trees. 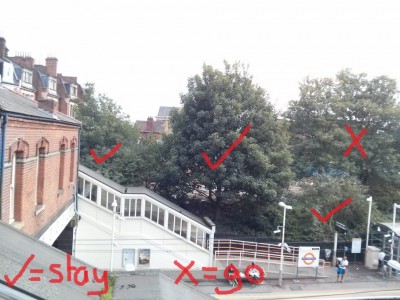 Helpful “infographic” via the campaigners

Lots of people have been unhappy about all this – Emma Thompson and Jim Carter even weighed into the debate. At a recent meeting between campaigners and Ballymore, the developer repeated that it intended to remove all the trees on its own land as it had planning permission to do just that. It agreed to look at how it might make the north-facing wall of the development “greener”, though no firm proposals have yet to emerge.

Despite another wave of publicity, Jonathon Weston, senior development manager at Ballymore, said this week, “Of the 32 trees identified in the Arboriculture Report we anticipate removing 27 within our site boundary. As part of our development plans we intend to replace these trees with 70 new trees as part of a comprehensive, high quality public realm offer.

We are currently in the process of reviewing the landscaped gardens between each new apartment building with a view to “greening up” the northern boundary at these locations as discussed at the meeting with the residents.”

The company, which has now named O’Hare & McGovern as its principal contractor, intends to be on site in February and, according to Weston, “we anticipate the trees to be felled within the next few weeks.”

In the face of all this, the campaigners hasve soldiered on. One of them, local resident Stephen Jones, recognises that the petition may be futile: “I think the only thing that could save the trees  would have to be some kind of miracle, like Ballymore going bust or the right person hearing about it.” However, he also makes the point that there is a bigger issue here. “At the least more people will be aware of the actions of greedy developers”. He casts it as a “David and Goliath” contest, although it seems highly unlikely that this slingshot will be enough to fell the giant this time around.

At this week’s West Hampstead NDF meeting, the issue of trees came up again. Local residents group WHGARA has written that, according to a different assessment of the trees called CAVAT, they are worth more than £400,000, for which the community is not being compensated.

The passion aroused by the tree saga is palpable. At the NDF meeting this week there was also a suggestion that the neighbourhood plan should state clearly that there should be a presumption against the removal of any trees in future developments.

If Ballymore has done anything, it has perhaps galvanised locals into recognising the benefits of greenery in our neighbourhood and perhaps will end up strengthening the protection afforded to trees.

Which would be good for property prices no doubt…