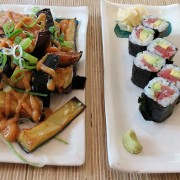 A friend of mine remarked recently: “Aubergine? The problem with that stuff is it soaks up all the oil?” To which I responded “That’s the idea, idiot!” Anyway…

I was in a bit of a dilemma the other evening. Planning a king-size curry later on, I needed a reasonably light yet sustaining late luncheon somewhere, and decided Feng Sushi would be a sensible option. Quickly settling in, I admired the ever-pleasing view of West End Green, and the list of tantalising sake options on the menu.

In fact, I chose a French white wine, which was quaffable, and then faced my next dilemma… what to select from a range such tempting dishes? I sometimes find this style of cuisine can be a little lightweight, but that was alright given my planned assignation with a king prawn jalfrezi with paratha and things later. I was to be surprised!

My side dish of Miso Dengaku (aubergine with ginger miso dressing) was first to present itself on The Captain’s Table (still not bored of that one), and I was immediately struck by the stunning presentation, and considerable portion size (here I go again!) Sampling the dish, I’m pleased to report a genuine ‘food moment’ – absolutely sublime. Though aubergine can be difficult to cook really well at home (at least with my abilities), this was executed with precision; neat batons, fried with care, resulting in a satisfying snap to the skin, and so harmoniously matched with the dressing, which was thick in texture, and intense in flavour. 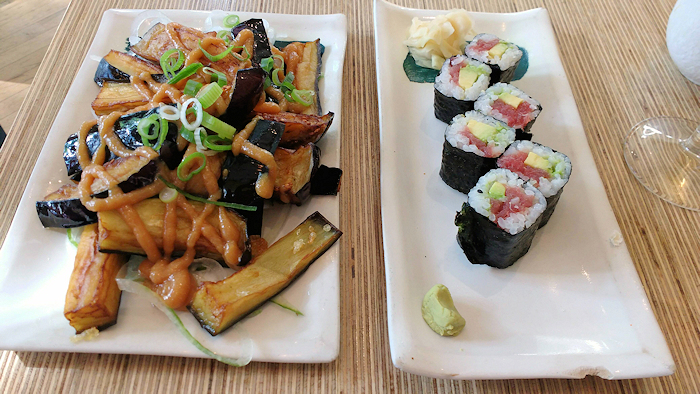 Miso aubergine and tuna/avocado maki start to fill Tom up

My Japanese-style fish and chips (splendid idea!) arrived looking stylish and highly appealing; three fresh-looking battered filets contrasted by some darker, very honest looking chips. I’d opted for six tuna and avocado maki as a side (which were most agreeable, as such things always are when of decent quality) and by this time I was rapidly realising that my “light lunch” was evolving into a bit of a feast! 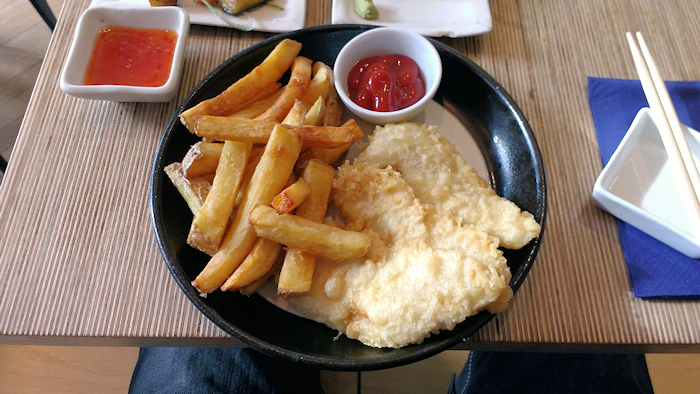 And the tempura fish & chips finish off the job

Comparison with the British version of fish & chips? The batter is a lighter tempura style, and the fish much firmer and compact. Different, but very… “eatworthy”. The chips were not fancy triple-cooked variants or anything, rather more traditional, and sensibly, tomato ketchup was provided. To summarise, I’d happily order the same three plates again, as soon as possible.

Inspiring food – left me feeling genuinely uplifted (I’m a simple soul). As for the curry – that wasn’t required in the end, though I did make up for it with two curries in two days the following weekend.

Get along to Feng Sushi, for goodness “sake” !

As we piled into Feng Sushi in West Hampstead a couple of weeks ago I think it’s fair to say we weren’t entirely sure what to expect. Sure, we’d all had sushi before; some of us had even eaten from Feng’s menu. But I don’t think anyone had sat down to quite such a feast of unusual treats before.

Silla Bjerrum, founder and MD of Feng Sushi, was an excellent host. She talked us through much of the seasonal menu, and showed that running the company doesn’t mean she’s lost the art of wielding a sushi knife as she prepared some extra fresh dishes for us.

The elongated space worked surprisingly well for our group – we’d taken over the restaurant for the night, so there was no need to keep the volume of chatter down for other diners!

The menu kicked off with Crispy Tofu with Yuzu Dip. I’ll be the first to admit that I’m not the world’s biggest fan of tofu. I had actually been treated to this dish a few weeks earlier so I knew what to expect. This made it even more enjoyable to watch people who were looking sceptically at the cubed tofu fritters transform their expression as soon as they popped one into their mouth. This is one of those dishes that turns your preconceptions on their head. Good start.

Silla then introduced us to some gleaming fresh mackerel. Most people who have an interest in sustainable food have probably had it drilled into us by the Hugh Fearnley-Whittingstalls of this world that we should be eating more mackerel. There are lots of them in British waters and they are delicious. Turns out that in the fast-changing world of fish stocks and classification, there are now some parts of the coastline where mackerel are already being overfished and thus the Marine Stewardship Council (MSC) has withdrawn its highly desirable certificate. Silla, however, maintains good relationships with fishermen and fish farmers around the country and is confident that she’s found a source of mackerel from further north that meet the sustainable criteria – even if the MSC is playing catch-up.

We got to try the mackerel that had been cut up before our eyes and that had been briefly steeped in some pickling liquor (raw mackerel untreated apparently isn’t that great). This was incredibly fresh (obviously) and that certainly added a depth of flavour that you don’t normally get with fish that’s seen the inside of a freezer, as much of it does, even with sushi.

More courses followed: some delicious autumnal mushroom fritters, sea bass maki, and more mackerel – this time served on a bowl of rice as donburi. Another of my favourites.

Before the katsu curry, Silla brought out a loin of tuna, which she also skilfully prepared for us. This is one expensive piece of fish – the portion she had on her chopping board was worth £80 wholesale. Once it was turned from loin into sashimi we all got to enjoy yet another bonus course!

The plum wine served with dessert was good (“Where’s the bottle?” a certain local restaurant reviewer was heard to cry), though having had 25% off drinks all evening, I’m not sure many of us needed any additional alcohol.

Overall, this was a really excellent night. It was the first time we’d taken over a whole restaurant before, and the first time we’d had demonstrations as part of the evening. It was resounding success. Thanks to everyone who came and a huge thanks to Silla and her team for making us so welcome!

There’s been clamouring for a sushi event in West Hampstead for about as long as I can remember. Finally it’s happening. 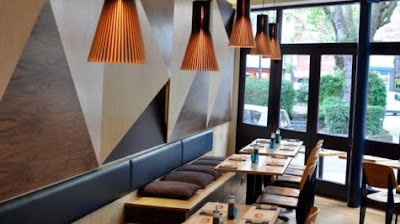 We’ll be giving their autumn menu a roadtest, with a set price menu comprising:

Drinks will be 25% off on the night too. It’s an excellent deal!

Silla Bjerrum, the woman behind Feng Sushi, will be there to talk to us a bit about the food and philosophy behind Feng as well; so it’s a great chance to ask her any questions about sustainable fishing or sushi, both of which she’s passionate about.

I’m really excited about this one – I think it’ll be a great night. Signing up is simple – get a ticket below (max 2pp), and you’re done. There’s no drawing names out of a hat for this one. Once you’re in, you’re in. You’ll pay on the night for food, drinks and service.