A couple of months ago I went to have a look round the show apartment at the Mill Apartments. Back then they were called the Mill Apartments Hampstead, though they have since been rebranded – extremely sensibly – as the Mill Apartments West Hampstead (although the website address hasn’t changed). I saw a 3-bed flat, which was very nice. And very expensive. £815,000 expensive to be precise for this first floor flat. The service charge would be in excess of £2,500 a year and a parking space was an extra £25,000. More hilarious was that if you wanted storage space in the basement “big enough for a bike and a couple of sets of golf clubs”, then you’d have to part with another £10,000. I think I laughed out loud at this point. Sounds like I might not have been the only one. 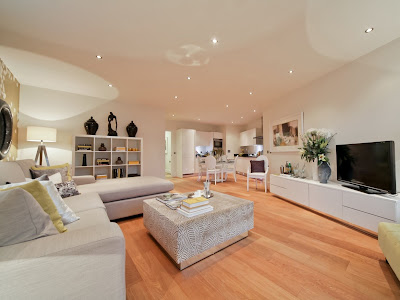 You might argue that £815,000 for a modern nice 3-bed flat in West Hampstead isn’t out of the ordinary. By the way, lets not kid ourselves here, while pretending these apartments are in Hampstead was presumably verging on some sort of property misdescription, they can hardly be said to be in the heart of West Hampstead either. Shoot-Up Hill is much nearer than West End Lane. Nevertheless, it is quite a lot of money for any flat around here outside the NW3/NW8 postcode. This is the cheapest 3-bed in the building, they go up in price as you go up the floors, so the 3rd floor 3-bed flat is £830,500.

Which brings me to the point of this story. To date, 17 of the 27 non-social housing flats in the development have sold (the three 3-beds have not). The prices for the four penthouses, which are just coming on the market now, are not on the website, but early communications said that the top price flat would be £1.5m, so I guess we assume that’s the price of the only 3-bed penthouse, while the cheapest penthouse is £1.35m.

Given that the apartments don’t seem to be flying off the shelves, so the developer, Taylor Wimpey, is holding an open day and resorting to “buy now” discounts in the form of cash/cash-equivalent incentives.

If you sign on the dotted line this Saturday at the open-day then it will throw in either a luxury holiday, £15,000 to spend at Selfridges or a brand new Mini. According to the PR company, “Offering these incentives is a new trend for estate agents and house builders, in order to kick-start a property industry that has slowed in recent years.” Or in other words “we overpriced the apartments a bit”. Now, if you’re willing to drop £1.5m on a 3-bed apartment in what is almost Cricklewood, it’s debatable whether a £15,000 cashback deal (1%) is going to make much difference to your yes/no decision. Even for the cheapest apartment still available (£588,000), you’d only be getting a 2.5% discount.

The press release implies, although certainly doesn’t make clear, that that expensive car parking space might be thrown in as well (or a 2-year parking permit). That’s a far more valuable incentive, both financially and practically, but this is a common negotiating tool as far as I’m aware.

Anyway, if you want to go along on Saturday, then there’ll be drinks, nibbles and live music between 11am and 3pm. If you want to view an apartment (and surely that’s the only reason to go), then best reserve in advance by calling 0845 676 2377. Even if you don’t have half a million quid to spend on the day, us locals are apparently welcome. I quote: “It is also a fab opportunity for local residents to find out more about their newest neighbour!”. Which is very friendly.