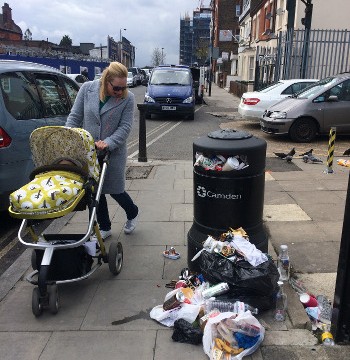 Back in April, we ran a story on problems with the new waste contract and identified a number of issues: fly-tipping, difficulties reaching the helpline, nappy collections and problems getting the new bins. Some of these have been resolved but by no means all.

When the new scheme was introduced we were promised that there would be “flexiblity to the meet the needs of West Hampstead”, an “education campaign from Camden and Veolia” and “pro-activity in targetting the problem areas”. To no-one’s great surprise, the reality has turned out to be quite different.

The residents of West Hampstead (or West Dumpstead as a local wit has relabelled it) continue to have numerous concerns about the rubbish situation. One recent example was outside Feng Sushi – a particular black spot. Literally.

Thanks to some campaigning by local Conservative activists Feng Sushi (at least we presume it was them) were shamed into action. The question is why can’t Camden get a jet-wash out elsewhere on West End Lane? It’s not rocket science.

How about cleaning our pavements? Thanks to whoever took initiative privately pic.twitter.com/UtdWkFSJoI

The owners of Hana are at their wits end about missed waste collections.

Can you look at this urgently as we can't report miss collection every day!!! Your collectors ignoring to collect plz explain why??????????? pic.twitter.com/7n47TIS1qW

But it not just West End Lane, Mill Lane has been a problem too and is in fact worse as it doesn’t get the regular collections of West End Lane.

Of the residential streets, Fordwych Road is a typical example of the sort of problems we see in West Hampstead. As Camden/Veolia seemed incapable of doing anything about it, residents were forced to record the problems and take action. They arranged walkabouts directly with Camden officers to come up with solutions for the worst spots.

Yet despite that, FOUR months after the introduction there is often uncollected rubbish and new black bins still have not been delivered, apparently because Camden have run out.

Camden can you get some new bins to 61-63 Fordwych as well? Loads of flats there and still only 4 black wheelie bins for multiple families

Others have had similar, but different, problems with extra green bins delivered that they don’t want and can’t get rid off. As for delivery of those garden waste bags the levels of incomptentence – is pretty impressive…

There was one visit by smiling Councillors Apak and Rosenberg – and a rare appearance by Cllr Yarde. (You would never guess that Cllr Rosenberg worked in PR :).

But once the cameras were gone, it was the same old problems.

This is vile @VeoliaUK @camdentalking Week after week the same problem! ? When will the new bins be installed as promised months ago? #fail pic.twitter.com/dNYTA7KK7C

The (Labour) Council seem unresponsive to constructive criticism partly because quite a few tweets about it come from Conservative activists, who after all, the opposition. Yet the Conservatives don’t seem that keen on actually sorting out the problems as it could be seen to be politically opportune to keep the issue live until next year’s local elections.

There are plenty of other residents of West Hampstead who are tweeting about the issue and problems (WHL gets a constant stream of emails about it). And local amenity group WHAT, is running a review of the recycling situation.

More fly-tipping at Broomsleigh St in @WHampstead. Everything in this pile could be recycled. Blame lies with tippers not @camdentalking. pic.twitter.com/mKLZ9wx7Wd

During the election campaign our MP Tulip Siddiq revealed that she had a private meeting with Cllr Meric Apak, due to her constituents’ (and her) concerns about it.

Camden Council has introduced the ‘Clean Camden’ App. It’s useful, however, it has no facility for reporting problems with the new contract (e.g. bins left on street). It does have a facility for reporting fly-tipping but it would be reassuring to hear that someone has actually been prosecuted for it and whether the app is actually useful for Camden?

A particular bugbear across the area is those flats and houses that leave their bin permanently on the pavement. We were assured by Camden when the contract was introduced that this would not be permitted. Not only is it unsightly, but it a hazard for parents pushing buggies and for those with impaired vision. Camden has street cleaning teams on every street at least once a week (not to mention parking attendants and dare we say it, councillors). Is it not possible for them to report problems?

The only real answer is the good old street-by-street walkabouts with Camden officers and councillors in and around West Hampstead to look at the problems and come up with solutions. Quite why this hasn’t happened before is a bit of a mystery. If local residents have any issues, keep tweeting us and/or email ">. Any fly-tipping hot-spots, any bins left permanently on the pavement? Other issues? We can pass them on to WHAT who are compiling a report to present to Camden.

WHL will report back in the autumn – let’s see if there is finally an improvement to West Dumpstead.

A grand old time at the Petite Corée?

What have you missed since July 24th?