The saga of West Hampstead’s farmers’ market has been more like a storyline from The Archers of late. Will it/won’t it/Has Nigel Pargeter fallen off the roof?

Then today a cow appeared. Not a real cow obviously, but a painted one. It’s standing next to the Mr Whippy van and the hot dog stand, so probably just as well it’s not a real one. It’s announcing that the Farmers’ Market will open on September 22nd. 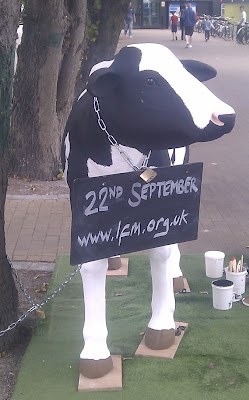 The LFM website confirms that the market will be every Saturday from 10am to 2pm. In early September the organisers will announce who’s going to open the market. In the meantime, LFM is still looking for a manager for the West Hampstead market if you’re interested!