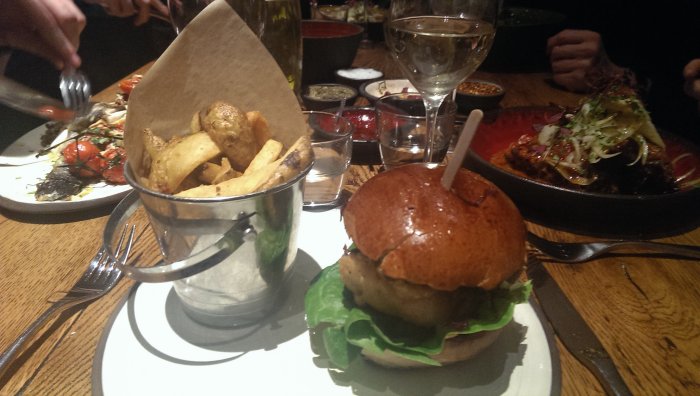 Zest at JW3 has garnered positive reviews from all quarters, but had yet to be put to the stringent test of #whampreview. Last Thursday, six of us squeezed into the packed restaurant in the lower ground floor of Finchley Road’s enormous new Jewish cultural centre to deliver the only verdict that really matters.

Booking is essential (note that Zest is closed Friday evenings and all day Saturday) and a glance at the appetising menu shows why. Mezze dishes are the obvious way to open, and we merrily tucked into pimped up hummus (£5), heritage carrots (£4.50), some cheese-stuffed peppers (£5), a really delicious pickled aubergine dish (£5) that I tried and failed to keep down my end of the table, a top-notch tomato salad (£4) and labneh – a strained yoghurt dish (£4.50). 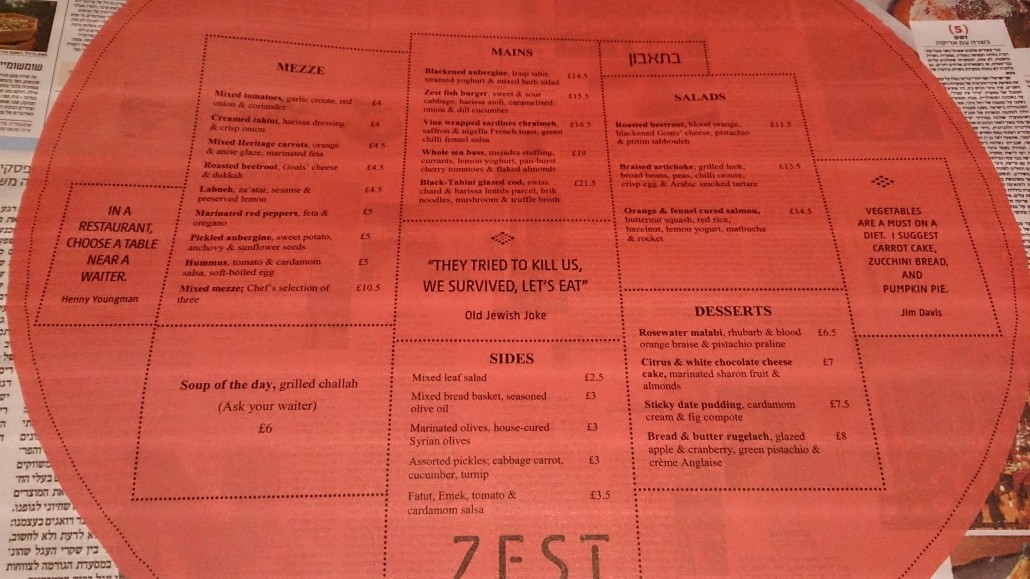 Main courses are not cheap – the whole restaurant isn’t cheap – but the quality of the entirely kosher food is outstanding. My boned-out sea bass with currants, lemon yoghurt, cherry tomatoes and almonds was stuffed with mejadra (a mildly-spiced lentil and rice mix) (£19). It was superb, perfectly cooked and a wonderful combination of flavours that I’d never had before. 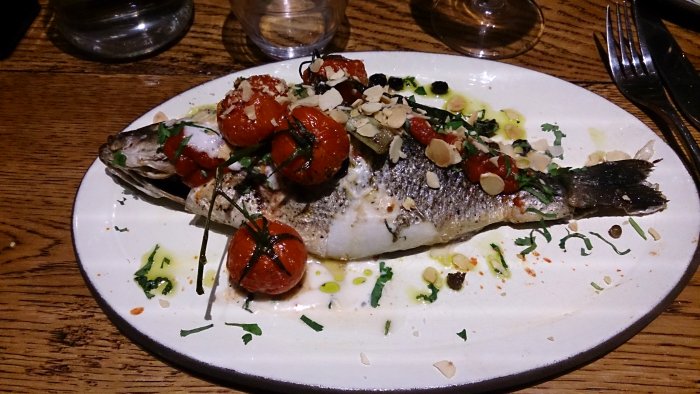 The Israeli Pinotage that four of us were drinking was good value by the bottle (£18). The wine list is very limited, and the per-glass price and the bottle price don’t match up for reds or whites, so plan ahead – you may find glasses are better value.

Unfortunately (and we weren’t the only ones to politely complain that night), the service was incredibly slow. Although our friendly waiter Luis took our order promptly, it was a long a time before any food appeared – even the bread and olives, let alone our drinks. In fact, the kitchen seemed to be so backed up that we were given dessert menus while we were still eating our mains.

This is uncivilised at the best of times, but when you’re paying fairly high-end prices it’s really not what you expect. It’s perhaps indicative of Zest’s biggest problem in attracting customers who are there purely for the quality of food and not because it’s a kosher restaurant. The bill came to £43 a head, but the vibe is more cafeteria than restaurant – the newspaper-style menus, the cluttered tables and the almost uncomfortable chairs all contribute to this.

But then came the desserts and all was forgiven.

There are four desserts, we tried all of them and they were all wonderful. I had the malabi (£6.50) – a sort of pannacotta topped with rhubarb that has probably gone straight to the top of the West Hampstead pudding league. 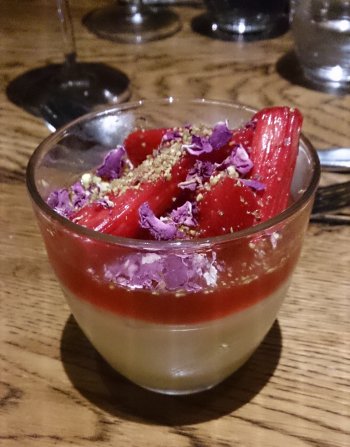 Zest is an excellent addition to West Hampstead dining. Whether the atmosphere is conducive to the kinds of special occasion meals that the prices suggest will be a matter of personal taste. I think I’d go back for mezze and dessert and a glass of wine. And there’s always the less formal café, which has similarly enticing food.

Emily: The mezze selection was interesting, with the purple heritage carrots throwing in elements of Heston as the dish appeared to be beetroot. The addition of anchovies and egg to the hummus gave a standard dish an interesting twist. The fish burger (£15.50) was very tasty and I particularly liked the pickles – red cabbage on a fish burger works incredibly well. 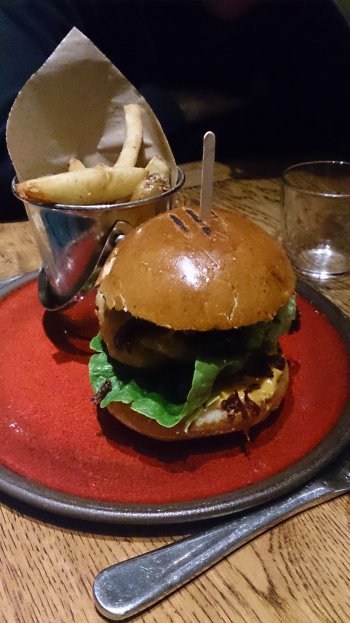 My highlight was the wine and the rugelach dessert. Not being a bread and butter pudding fan I was nervous about ordering, but it was possibly my favourite part of the meal. A lovely flavour, but not so heavy to bring on a pudding coma. All in all, pleasant service, allbeit a bit slow at the start and too rapid at the end, tasty food and a lovely ambience. Clean loos (always important) and the prices were what I expected for that location. 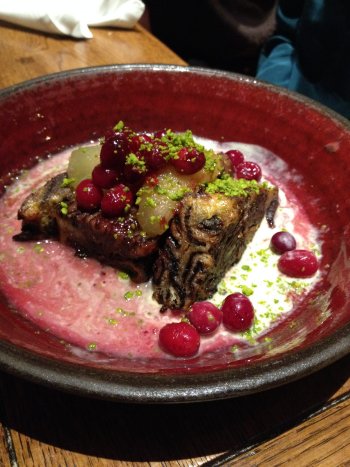 Adrian: I can’t recall ever being given a dessert menu between mouthfuls of my main course, nor having to pay before I’ve finished my meal. But our Portuguese waiter was charming and largely covered gaping chasms in the service/production process that should have been ironed out by now. Still, the double-heighted, concrete-laden construction of Zest’s JW3 home offset the specially-commissioned, colourful crockery wonderfully. If you’re going to sit around for a while waiting for your food, it’s nice to have good side plates to fidget with.

When our starters did arrive, they were worth the wait – tasty mezze straight from an Ottolenghi photo shoot – fresh, zingy and accompanied by excellent freshly-baked bread. My main course of sardines wrapped in vine leaves (£16.50) was okay, if a little pricey, lacking a touch of refinement in process that wasn’t made up for in taste. The soggy slab of once-toasted bread underneath did nothing for its cause. On reflection, I should have had the fish burger – the mouthful I stole was incredible. 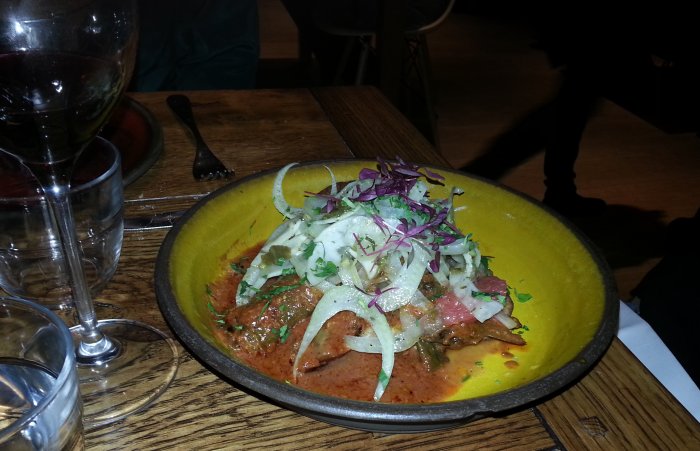 Thankfully, dessert – a bread-and-butter pudding made from rugelach, a rolled pastry filled with cinnamon and poppy seeds and resplendent with poached pears and pistachio crumbs – was unctuous and comforting with bursts of tart cranberries setting it off a treat (£8).

I’d probably go back – not just for the surprisingly good wine – but would likely choose the café rather than the restaurant, which seemed to offer the same mezze and decadent desserts without the expensive (slow) service.

Debbie: How to choose? There was so much on this menu that looked enticing – luckily being a party of six we could order pretty much all of the mezze plates without appearing too greedy. Highlights for me were the Mixed Heritage Carrots, beautifully glazed purple carrots mixed with feta, and a wonderfully creamy hummus. The mains were equally intriguing, the sardines wrapped in vine leaves proved to be an excellent combination and were served on two slices on French toast which was perfect for soaking up a delicious green chilli salsa that delivered quite the kick. It may not have been the most obvious combination of ingredients but it worked brilliantly.

Dessert was the final culinary revelation of the evening, a very more-ish sticky date pudding with a fig compote (£7.50) that was just the right amount of sticky without being heavy and packed with flavour. My only complaint would be the overly long wait we had for our food at the beginning of the evening but with very affable staff and such excellent food (and company of course) this did nothing to spoil a highly enjoyable evening. 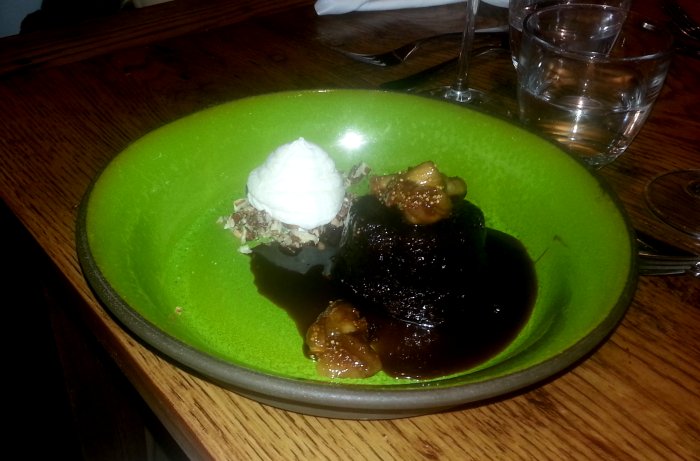 Tom: With its “posh canteen” feel and lively atmosphere, I wasn’t quite sure what to expect from Zest’s food and wine. We had to wait a while for drinks, but the Rioja was good and the Israeli Pinotage excellent; a wine of real depth and character.

Mezze dishes were light, with fresh ingredients and subtle flavours. A decent start. My main dish was fascinating. Black tahini glazed cod, Swiss chard and harissa lentils, with brik noodles, all resting in a mushroom and truffle broth. At £21.50 I was keen to see if it delivered, and it most certainly did. I’m not even sure I totally understood the dish; a little awkward to eat, juggling a soup spoon with knife and fork, which were fiddly to use in the deep (but very attractive) bowl. But the ingredients, cooking, tastes and textures were sublime! Delicate yet bold, with gently-done chard, perfectly cooked cod, and spoonfuls of a magnificent broth with the noodles and lentils…so much to appreciate, yet it all married together so well. 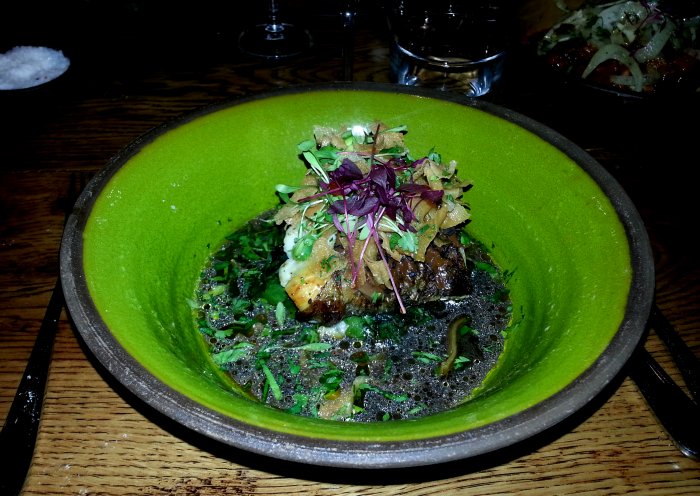 Citrus and white chocolate cheesecake, with marinated sharon fruit and almonds (£7) was initially impressive for its generous size, then more so for being quite delicious. I’d have liked a slightly firmer, colder topping, but that’s a minor quibble about a lovely dessert. 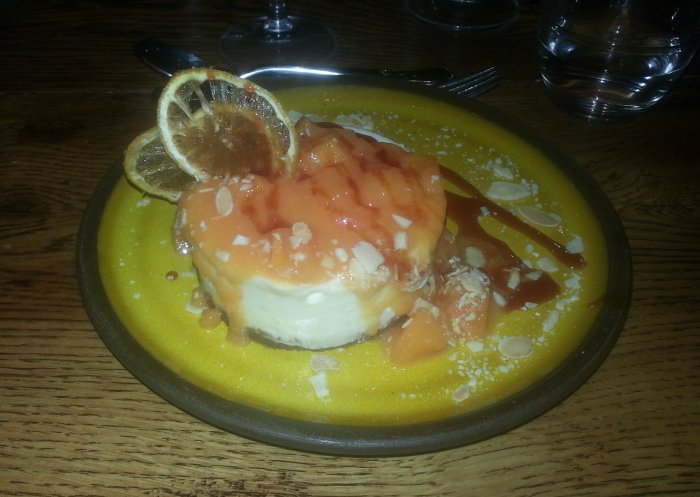 Nicky: The food at Zest all looks very attractively thrown together, on colourful glazed bowls and plates, but don’t be fooled by its casual appearance. When you eat these dishes it becomes clear that a very skilled team has put them together, and every component is there for a reason.

Even deceptively simple-sounding dishes like the fish burger are an exciting mixture of flavours and textures: the crisp and juicy fried fish, the piquant red cabbage relish and soft glazed brioche bun were the perfect combination. I’m only slightly ashamed to say that I carried on eating it even when I felt pleasantly full – it was that addictive.

Prices are on the high side, so dinner at Zest would be an occasional treat for me – but I’ll definitely be back soon to sample brunch and the cakes in the café.

What have I missed since January 20th?