Lots of the estate agents’ boards have come down. One of the remaining offenders removed all its boards on Saturday, but some agents are still not playing ball. All the photos here!

How many passengers do you think pass through West Hampstead’s three stations every year? I’ll give you a clue… it’s a lot. 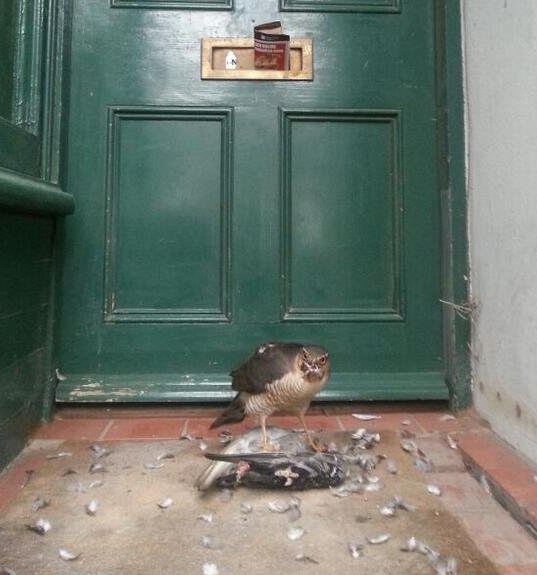 “That awkward moment when you find a bird of prey dissecting a pigeon on your parents’ doorstep”. Photo via Nico Lennon

Crediton Hill residents have been asked to be vigilant after a couple of unwelcome incidents.

A #whamper ran a marathon… in the Sahara. All to raise the profile of the charity she runs.

The lastest plan for Gondar Gardens was surprisingly rejected by Camden. It will no doubt go to appeal again.

Wes Anderson’s The Grand Budapest Hotel is our next Film Club event on March 9th at the Tricycle.

What do locals think of West Hampstead? More than 120 comments have now been left on the Neighbourhood Development Forum’s mapping tool.

Nymph()maniac Volumes 1 & 2 are the Film(s) of the Week. Check out all the local listings and, yes, Gravity is STILL playing at the IMAX.

Girls in Trouble at JW3 next Saturday is this week’s Gig of the Week.

Camden is planning to replace playground equipment at Sumatra Road open space over the next couple of months.

Amid a flurry of complaints about new shisha café Monte Cristo, it transpires that it doesn’t have planning permission. Camden has asked the owner to submit an application within three weeks.

Worried about the impact of HS2? The Kilburn Lib Dems have written a good overview and there’s a public meeting on March 18th.

The rumour mill says that Picasso’s is going to become an organic greengrocer.

A sneak preview tasting of the food at One Sixty (aka the Smokehouse) suggests it will do well. It’s due to open in a couple of weeks.

Swiss Cottage post office pulled down its shutters for the last time and the new branch within WH Smiths opened.

Father Andrew Cain, St Mary’s and St James’s openly gay vicar, has caused a stir by announcing his engagement to his atheist partner.

Swiss Cottage gyratory was one 33 junctions TfL plans to improve for cyclists. Details were thin on the ground.