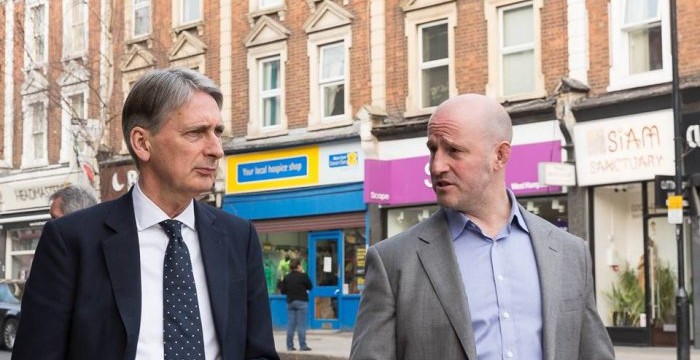 Simon Marcus wants to be your Conservative MP. He also really wants you to know that he would be a strong independent voice for Hampstead & Kilburn. On the Conservative backbenches, but independent. Throughout the hustings, and in his interview with West Hampstead Life, Simon has gone to considerable lengths to make clear that he is prepared to stand up and disagree with Conservative party policy – on HS2, on the spare room subsidy, on Trident… 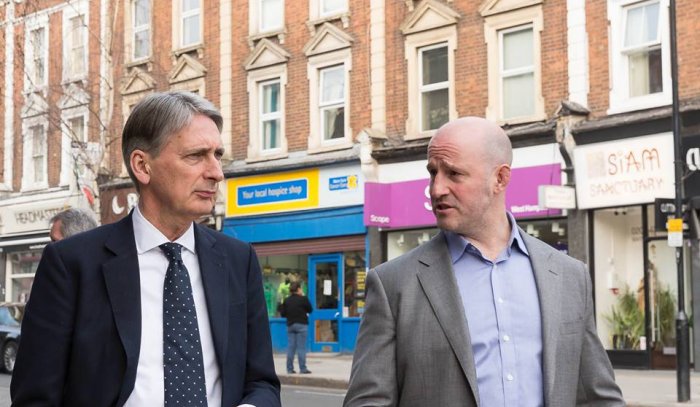 A cynical observer might wonder whether he’s banking on the electorate in these parts favouring a strong minded MP. Glenda Jackson, stepping down at this election after 23 years as the local MP, has never been afraid to speak her mind after all.

Simon himself will tell you that it’s the very freedom to be able to speak his mind that brought him across to the Conservatives from his left-wing background.

Simon talks a lot about the sense of duty instilled in him by his parents. His father, an Irish immigrant from Cork, was one of the first NHS doctors and saw first hand how tight-knit communities were in the East End of London after the war. “That extraordinary social conscience and witnessing the poverty and the hardship but also the duty and the strength of community that people had gives you a very clear view of the world,” says Simon.

His great grandparents escaped the rise of fascism in Eastern Europe but found it again in the form of Oswald Moseley in London. “They were all communists, and I spent a lot of time with them; so my grandfather would read the Morning Star with me.”

Simon describes his parents as being “democratic socialists”. “Freedom of speech was taught as a foundation of democracy,” he explains. At university, as a young left wing activist, Simon describes his frustration at arguments being shut down. “I expressed views that the left would not allow me to express, but they were important questions – if we have too much immigration then wages are lowered and we have to make sure people have a good standard of living.” But, he contines, these sort of discussions weren’t allowed and he’d be called terrible names.

Some 20 years later, having moved across the political divide, Simon argues that his views haven’t changed. “Twenty years is a long time , but my views didn’t change at all. I tried to work for the Labour party after university, but Labour became a party with which I could not live.”

“One of the many reasons I found a home in the Conservative party was because of my values, and the values of my grandparents and parents – forged in the times of the Great Depression – because you’re allowed to speak freely. You can criticise the Tory party from any direction.”

Simon’s tries to boil his views on politics down. “It’s about doing the best you can with what you can for all. And the difference between socialism and more mainstream beliefs is that subtle difference between absolute equality and equality of opportunity. I believe in equality of opportunity. Absolute equality doesn’t work and wherever you’ve seen it tried, people have died in their thousands. And that should be the end of the argument, but it’s not for some people. What any successful leader has realised is that you have to occupy the centre ground, and that means equality of opportunity – letting people run with their talents and their abilities. I think Labour has perhaps lost sight of this.

Simon reels off a list of his values, again drawing on his family’s background. “Hard work, discipline, family, respect for others, responsibility for yourself and for society.” “It’s incredibly ironic that the values my communist grandparents taught me could only find a home in modern politics in the Conservative party”

We turn to the here and now and to Hampstead & Kilburn. The consistent complaints, says Simon, are cleaner streets, cleaner air, cheaper housing, more police on the beat. “Obviously mansion tax is huge in more than half the consitutency while social housing is a big issue on the South Kilburn estate. In the north of the constituency, overdevelopment is a huge issue.”

Getting even more local, Simon waves a hand at West End Lane from our seat in The Alice House, “What would really make this one of the finest streets in North London would be if the Travis Perkins building was not only replaced with a good mix of social housing and affordable and private housing but with some social space below, off the road. You need a focus for a high street.”

How will he get this done?

“A large part of my work if I’m elected will be carrying on where I left off as a councillor [for Hampstead Town].” He talks about the South Kilburn estate, making sure there’s more social housing there. “There’s got to be a better way for the people who’ve lived there all their lives. I know you’ve got to make money and you’ve got to pay for it, but there’s got to be a balance. So it would be up to me to ask for a meeting with the developers, the investors, with Brent Council, and say ‘look, lets find a way through’”.

Simon believes his track record “speaks for itself” before going on to elaborate what he’s achieved. “I’ve been in small businesses my whole life, paying wages, creating jobs, creating a ground-breaking charity out of nothing. I worked for the British Chamber of Commerce in Brussels for four years; I’ve worked with the biggest law firms in the world, the biggest building firms in the world, with every industry from defence to petrochemicals. I think getting people round a table and getting a good result is something I’ve done most of my adult life be it on a global scale or be it at the ward scale. It would be a real privelige to do it for this constituency.”

Although this makes him sound like some sort of superhuman business man, Hampstead & Kilburn isn’t Simon’s first tilt at Westminster. In 2010 he stood in Barking in an effort to knock the BNP into third place. The seat was always safe in Labour hands, but the Tories were determined that the BNP shouldn’t come second and Simon secured that against the odds – a fact he likes to mention as the bookmakers continue to keep Labour’s Tulip Siddiq as odds-on favourite here in H and K.

“I’ve spent my life creating something out of nothing and earning trust from people. To transfer those skills to politics is just second nature.”

If Simon wins and the Conservatives are in power after the election he states clearly that he has no aspirations in this parliament to be anything other than a backbench MP with a “loud and strong voice” for the constituency. He’d like to be involved in areas such as social policy and education, and says he’d refuse a junior minster position because it would mean he couldn’t criticise the government. “I’m not a career politician, i’m going to stand up for people and do what’s right. And you can hold me to this – I’d say no.”

Amid all the talk of the fact that the Conservatives are trying to overturn the smallest majority in England of just 42 votes, Simon also wants to clarify his quote to Al Jazeera last year where he said it might be too soon for him to win. “A year and a half ago I was just talking about both sides of an argument, making a reasonable comment. But if you’re asking me now, I’d say Hampstead & Kilburn has changed very quickly and that is why I have a very good chance of winning.”

The final word to Simon. I should vote Simon Marcus because… “I was born and bred here, I’ve lived here all my life, this is my home and I will work very hard for you.”