After #whampgather this Sunday, why not wend your way down to Kilburn for some music? “What sort of music?” I hear you ask. Let me hand you over to Nathan, who can explain all.

“Musicians have often made high-profile attempts to show that they’re not one-trick ponies. George Michael has tried to sing folk songs from the American Great Depression, Luciano Pavarotti has duetted with Frank Sinatra on ‘My Way‘, and more, much more than this, Michael Bolton has had a crack at ‘Nessun Dorma‘.

Let’s agree that none of the above really worked.

Far less high-profile, but surely more successful, will be the first full gig given by the Dead Sea Midnight Runners, this Sunday at Kilburn’s Tricycle Theatre. 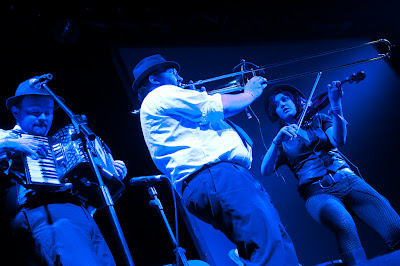 If you think you know klezmer music (and hey, you’re from North London, so you should), you are probably right. Which is why you might find this gig interesting.

The Dead Sea Midnight Runners (also known as Fat Klez) are not steeped in klezmer. Martin White is an accordionist, and largely plays music that the accordion should play, as well as his own music for the Mystery Fax Machine Orchestra. Nathan Hamer is a trombonist of the classical tradition; he listens to Mahler to relax and can spot a parallel fifth at ten paces. Ben Handysides is a jazz drummer, which means that he does not know silence. Amy Butterworth, a lifelong West Hampstead resident, has dedicated her life to Slash and the preaching of rock violin. Just like so many other West Hampstead residents.

The band first formed in the spring of 2010 having been asked by the quite legendary Mark Thomas to play in his ‘Walking The Wall’ shows at the big summer festivals. A long, sold-out run at the Tricycle preceded Glastonbury’s first two-hour comedy set to an audience of thousands. Appearances at Latitude, Leeds, Reading and the Greenbelt festivals followed. In January 2012, Mark gave his show a swansong at the Tricycle, and it was during that week that outgoing theatre director Nicolas Kent invited the band to put on their own show.

There’ll be surprises and laughs, because having fun is what klezmer is all about. It’ll be short (just over an hour), because it’s on a Sunday night and we all have ironing to do. Tickets are a mere £8. That’s cheap fun. See you on Sunday. Oh, and bring a pun.”

What have I missed since June 11th? Starter for 10