J’s – the pizza and breakfast place on West End Lane has closed.

I learned that TS Eliot lived briefly in Compayne Gardens.

Find out what locals think of the neighbourhood (misty eyed or hungry for change?) These views will help inform the Neighbourhood Development Plan. There was a meeting about the plan a couple of weeks ago, with a progress update and lots of questions.

The original Gondar Gardens planning proposal has been passed by the Inspector. 16 units will be built there. More on this story this week.

Read about the plans for 65-67 Maygrove Road and their impact on Sidings Community Centre.

If you have a spare winter coat, why not give it to someone who really needs it.

Sea Lantern is opening as Hana, another Persian restaurant apparently.

Bradley “Kid from Kilburn” Wiggins said that he’d get the bus up the High Road in this long Guardian interview.

A craft market has sprung up opposite the farmers’ market.

Rust and Bone is @NxNW6’s Film of the Week.

Roadworks on the southern end of West End Lane caused traffic gridlock in the latter half of the week.

Did you know Quex Road almost had a tube station?

Two of the Camden New Journal’s journalists won at the Regional Press Awards.

There’s a new community noticeboard outside the library.

105 years ago this week, a child was abducted in Kilburn.

Willesden Green’s Save the Queensbury campaign has a website.

A few of us sent some very silly Halloween Hyperlocal tweets.

NW6’s favourite racehorse is back after a break.

Coming up:
Monday: Fireworks at Roundwood Park (the only large display in the area)
There’s a wild mushroom & game menu at La Brocca next Friday-Sunday
A murder mystery play at Kingsgate Community Centre starts on Friday

Tweet of the Week
Was it love at first sight, or first 1,000th sight?

Photo of the Week
Big changes near Kilburn Park 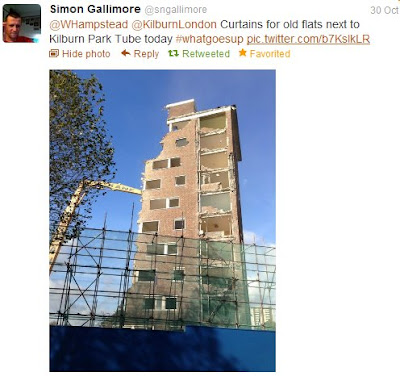 65-67 Maygrove Road: investing in Sidings Gondar Gardens will be developed