There’s a new momentum on Mill Lane. This motley collection of independent shops has tried before to unite behind some self-promotion but these efforts have largely come to nothing. Now, the West Hampstead street that’s often seen as West End Lane’s poor relation has some impetus behind it thanks partly to the arrival of Monsters of Art and the youthful enthusiasm of co-owner Abby Wells. 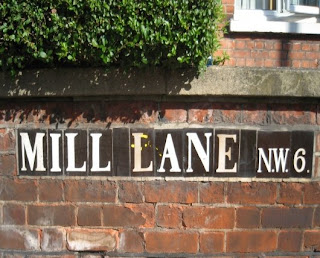 Several of the businesses on Mill Lane held a preliminary meeting this month to discuss how to boost the street’s profile. Since then, Abby has met with Kate Goodman from Camden Council (Kate ran the place shaping initiative that many of you will remember from earlier in the year), and more of the businesses have piled in with ideas.

What’s the problem?
Mill Lane has a few related challenges to overcome: it suffers from relatively low footfall; the popular businesses are spread out along the street so there’s no focal point; it has one of the highest vacancy rates in the borough (18% in June 2010); and many people, especially those new to the area or passing through, simply don’t know that there are shops down there. Glance down the road from Fortune Green Road and you would be forgiven for thinking it was a predominantly residential street. Yet, as the star prize at whampgather proved, there are enough businesses on the street to create an amazing hamper of goodies. From The Tiffin Tin to The Alliance, Mill Lane has plenty of gems.

Isn’t this the council’s job?
Camden’s West Hampstead placeshaping document, published earlier this year, recognises the pressures facing Mill Lane and sets out ways in which the council could help. It explains that the council cannot fund direct business support, and that its role now is to act “as an enabler to small businesses through signposting them to national and regional growth support organisations.” This also includes pointing retailers to information and providing support to trader groups.

There are some specific actions in the placeshaping plan that refer to Mill Lane.

This may sound a bit like throwing a life jacket into the ocean, but it’s better than nothing and if it helps the businesses coalesce into one group that can form a consensus on what would most benefit the area then that alone is a big step in the right direction.

The relatively new West Hampstead Business Association could have a role here. However, a separate Mill Lane group that collaborated with the WHBA might be more effective than the WHBA acting as an umbrella group for all local businesses, given the different needs of West End Lane and Mill Lane.

The latest draft of the Neighbourhood Development plan also singles out Mill Lane as in need of its own section. Specifically, it suggests the following six policies should be applied to developments in Mill Lane:

All this tell us that the problems of Mill Lane are widely recognised. But at a time of limited (read: non-existent) public resources to help tackle them, the onus falls on the existing businesses to overcome these obstacles. Which brings us back to the latest wave of energy washing over the street.

At the November meeting there was broad agreement that public awareness of Mill Lane’s offering was too low, and that the lack of a cohesive feel to the retail units hindered the appeal of the street as a shopping destination. Beyond that, the more ambitious challenge was to do something economically viable with the empty shops

Raising awareness
The immediate solution proposed was to get the council to implement better signage (which would partly fall under the Legible London signage action above), at the West End Lane end of Mill Lane, on West End Green, and outside West Hampstead tube station. Since that meeting, Kate Goodman has said that extra signage to the north of West End Lane will be installed, but played down the idea that there’d be tube station signage too.

The idea of preparing a small brochure to hand out has also been raised, although it’s not clear who would fund this. Camden have broadly supported this idea though, and may be able to help with some of the distribution logistics. Prod from Mill Lane Barbers, whose enthusiasm is also hard to beat, has suggested a caricature poster capturing the essence of the Lane and the businesses on it as well.

One idea that’s likely to prove popular is a late-night Christmas shopping event. It may even be possible to get some footprints laid on the pavement to draw people in from West End Green. Those businesses at the West Hampstead Christmas Market on December 8th could also help promote the street more generally, and there’s talk of having a board at the market showing the press coverage that some of them have received over the past couple of years.

One Lane
The shops also saw that Christmas would be a good opportunity to work on the look and feel of Mill Lane and try and make it a more unified shopping district. Something as simple as having the same Christmas lights in as many of the shops as possible could achieve this – these could be officially switched on at the Christmas shopping event.

An idea that I particularly like is that businesses up and down Mill Lane ‘donate’ parts of their property, (e.g., a back door, shutter, or any outdoor area), to professional artists who will then jointly produce a piece of street art. This concept has worked brilliantly in Middlesex Street E1. It has the potential both to improve the look of Mill Lane and attract visitors.

Breathing life into empty premises
Maximising the use of the empty (or almost empty) shops on the street with pop-up projects (galleries, retail space etc.) was a popular idea. This would help animate Mill Lane, and provide more of a continuous stretch of retail operations along the street. One idea was to collaborate with artists who might rent units for a short period for gallery and/or workshop space. Kate Goodman was in favour of the pop-up shop idea, and apparently there are nine empty shops on Mill Lane that could possibly by used. She is going to find out who owns/manages these properties and forward on their details – a good example of where the council can support these initiatives.

Both the pop-up idea and the street art idea certainly tie in with my own belief that Mill Lane would be well served by becoming an explicit artisan/art quarter. In the immediate term, the local business owners recognised that coordinating so many things popping up is a lot of work and perhaps would be too time consuming for them to tackle (after all they do still have their own businesses to run). A stop-gap measure would be to use the shop fronts as art installations, or hang something in empty shop windows.

Mill Lane needs a bit of love, so why not have a wander along there this weekend and refresh your memory as to what’s available. From carpets to cupcakes, you might be surprised at the shops and services you find.