Last night, the local Liberal Democrats nominated Emily Frith as their candidate for the Hampstead & Kilburn seat at the next general election. 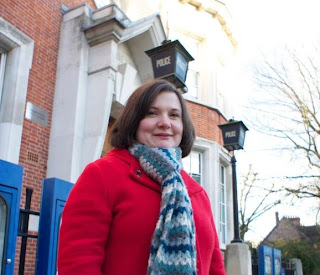 Frith is the first candidate from the main three parties to be named. The Conservatives will be choosing from a shortlist of three at the end of the month, while Labour are being much cagier and it may not be until the summer that we find out who will be the third name in the ring.

What do we know of Emily Frith. According to one of her two Twitter accounts (@EmilyFrith and @EmilyFrithHandK) she’s a “Blackheath mum”. As Richard Osley has already pointed out, this gives us the (outside) possibility of two consecutive Blackheath residents as MP – Glenda Jackson also lives there. I know lots of you feel strongly about such things.

The more politically focused account, describes her as “a comms advisor working for two national charities. I have over 10 years’ campaigning experience, for charities, community groups & the Liberal Democrats.” Her LinkedIn profile tells us that she’s had experience with the Prison Reform Trust, Driver Youth Trust (a charity for children with literacy problems), as well as for the Lib Dems themselves.

On her own website, emilyfrith.net, the Cambridge graduate explains why she wants to be an MP.

“I’ve seen the job of an MP first-hand, and I think its one of the best jobs you can have. Yes its busy, yes the hours are silly and you are doing at least two jobs – being present in your constituency and campaigning on its behalf in parliament, but the rewards are immense.

I want to be a really good backbench MP. Someone who helps individual families with their housing problems or campaigns on issues like transport or access to local schools. Yes I know casework can be frustrating, when progress is slow and the demands are high, but to actually succeed in changing someone’s life in such a fundamental way is a privilege.

I want to stand up for the issues I care about, which tend to be the kind of Cinderella services which are too often neglected by mainstream political debate – prison reform, children in care, mental health services and homelessness. I think that the intractable seeming nature of some of these problems is really down to a lack of political will to solve them. I want to be a voice for those people whose voices are so often ignored.”

So far, so fairly predictable.

Hampstead & Kilburn is a very high profile constituency, even more so after the incredibly close race in 2010 that saw her colleague Ed Fordham place third, just 841 votes behind Labour’s Glenda Jackson. Emily has a big task on her hands if she is to overcome the antipathy towards Lib Dems nationally and climb ahead of the two other parties. At least, while campaigning on Sunday, she saw at first hand some of the unique challenges of H&K:

“Spotted two celebrities at different times of the morning– James Corden and Matt Smith. This is such a glamorous constituency.”

Before she was selected as the candidate, Emily wrote that she would “Design a strategy to engage diverse groups such as young commuters, families and people from different backgrounds with key messages and different communication tools, e.g., Twitter and Facebook”. Now that she’s been chosen, does this mean we’re about to endure a social media onslaught? Glenda won without much recourse to social media, but Ed – by far the most active online of the three – no doubt garnered some votes because of his tweeting. Aside from the two Twitter accounts, there’s also a Facebook page already.

Based on this trawl of her online presence, Emily seems to be an enthusiastic candidate with a strong record of creating campaigns but it’s not immediately clear what many of these campaigns have achieved. This may just be a communication issue, but she does describe herself as a communications professional.

No doubt we’ll get to know more about her in the coming months – we’re still more than two years away from the election. At least we can be fairly sure that if she should surprise the early pundits and become the next MP for Hampstead & Kilburn, she’s unlikely to disappear off to the jungle. Here’s what she tweeted about Nadine Dorries’ recent escapade:

“Being on telly and eating insects is not a good enough reason for having a month off work. What does #nadine think she’s being paid to do?”

What have I missed since January 7th? WHAT focuses on transport