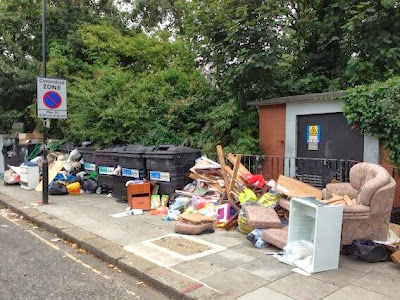 Over the past few months, rubbish has been the overriding issue in West Hampstead. First, there were teething problems with Camden’s new recycling and rubbish collection system.

Some problems remain with this, but the situation does seem to have improved. Not that everyone likes the new arrangement:

The problem now – and what a problem – is fly-tipping. Camden has signs around the area threatening prosecution, but those seem to be idle threats and the problem’s getting worse.

This sort of “industrial-scale” waste is completely unacceptable. This looks like house clearance and builders’ waste material that they should be paying to have taken away, or drive to their nearest dump.

One might argue that at least this waste is being left by a recycling centre, and therefore it’s more likely that Camden will come along and collect it. There’s no such provision on Blackburn Road, however:

Netherwood Street in Kilburn also suffers from business waste problems – this is nothing new, the day Kilburn flooded last summer, I took this photo on Netherwood Street. 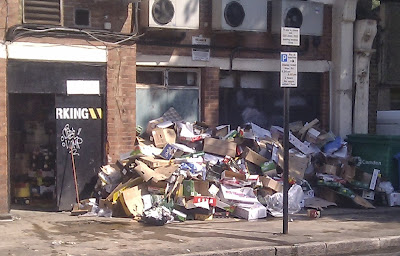 Yet when a resident asked how many fines or prosecutions have been taken forward by Camden Council under the Environment Protection Act 1990 (as featured in the sorry ‘No Dumping’ sign), in Kilburn ward over the last few years, he was told ZERO.

One of the knock-on effects of the large-scale fly-tipping is that people… locals… start to think it’s acceptable to leave single items outside.

just dump it there – the council taxpayer @camdentalking will take it away. Saves you the bother #whampflytipping pic.twitter.com/UiUenGhEch
— John Mennis (@JfmJm) September 22, 2013

The Guardian recently published an article and accompanying map of fly-tipping at the council level. Camden fared fairly badly placing 11th on the list of total incidents per 1,000 people, and 12th on the overall total (Newham and Southwark fare much worse). More interesting than the map is the data on actions taken. Nationwide, only 0.5% of incidents result in prosecutions, despite the fact that the success rate of those prosecutions is 99%.

Flick Rea, Fortune Green councillor, has written about the problem too. She concludes:

There are probably no easy answers – maybe the refuse people don’t care or they’re trying to do too much in too short a time, maybe they aren’t properly supervised either by their own bosses or by officers in Camden who are supposed to monitor the contract. Also it seems lots of people just don’t care where they leave their rubbish – smelly old mattresses, broken chairs etc. Whatever the reasons – our streets are definitely a mess!

There is though, she suggests, a light at the end of the rubbish-strewn tunnel:

Camden’s Street Environment Services have been re-organised, recruited new staff and hope that when they are all in place, things will improve and our streets will get to look a bit cleaner.

Lets hope so. Like all councils, Camden is strapped for cash at the moment, and street cleaning/refuse collections are often in the firing line for cuts. We should be thankful that we haven’t been reduced to fortnightly collections. Nevertheless, when there are so many flagrant fly-tipping abuses, it seems that a concerted effort to prosecute would help clear up the problem (and pay for itself in fines).

Meanwhile, if it’s all getting too much for you – never fear, Boris is here. The golden-haired mayor recently helpfully suggested we should all pitch in.

I’m all for a bit of community involvement in clearing up after ourselves, but I don’t think I can lug 20 bags of building material off to the tip thanks all the same Boris.

Your views on West Hampstead’s future