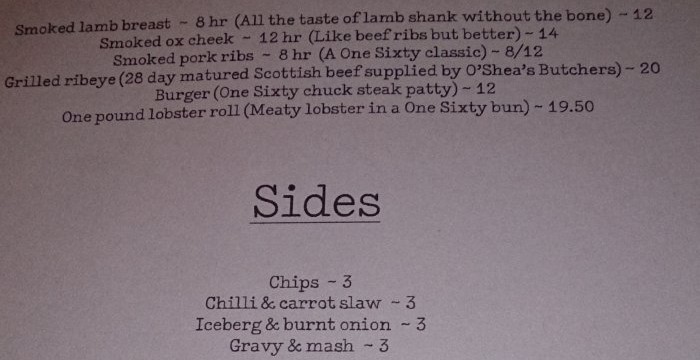 It’s been the most eagerly awaited opening I can remember in West Hampstead. The Smokehouse, now called One Sixty, has had tongues wagging and salivating ever since the news broke that the combination of Michelin-starred restaurateur David Moore, craft beer loving publican Sean Martin, and acclaimed chef Andrei Lesment were coming to West End Lane.

I was lucky enough to be invited to a preview tasting a couple of weeks ago and then booked a table this Saturday night for the soft launch. We’ll write a full review over the next few weeks but, as interest is so high, I figured it was worth giving my immediate reaction.

This is a place for meat-lovers. Many on Twitter have been asking what the vegetarian options are. Right now the only option would be the larger mac & cheese. There’s a lobster roll if you don’t fancy meat, but otherwise it’s mac & cheese, or pickles. It will be interesting to see whether One Sixty decides to extend the offer for vegetarians.

The menu isn’t extensive either, though it’s not clear whether it will change regularly depending what’s smoking – the printed menu last night didn’t tally exactly with the online menu, so there’s clearly room for manouevre. Personally, I prefer these shorter menus, which tends to imply fresher ingredients and dishes that have been perfected – there’s nowhere to hide after all. 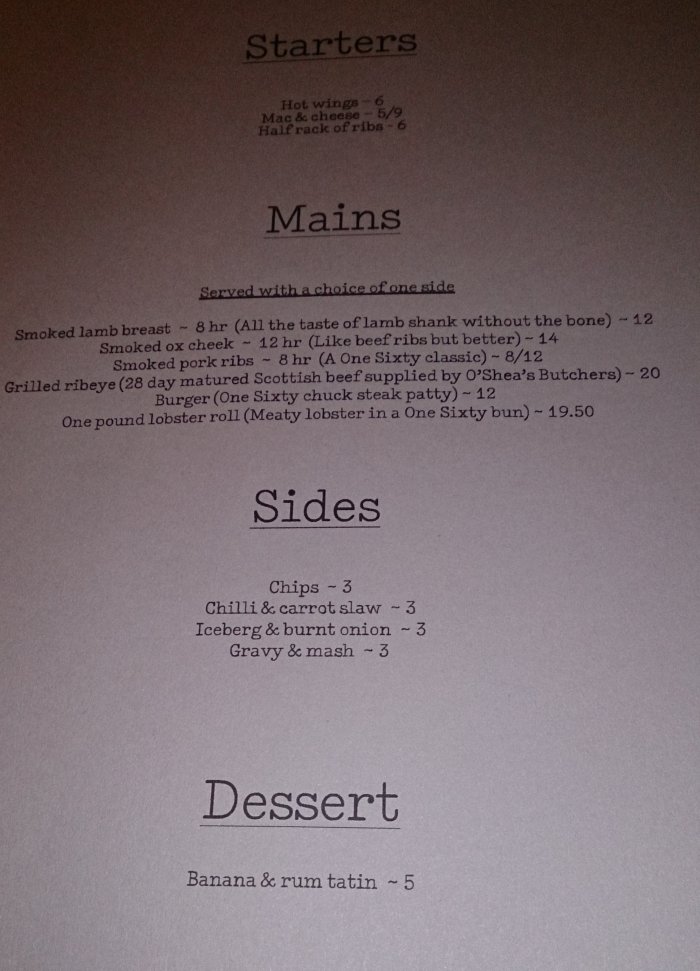 The front half of the venue is the bar – a large space with a few tables and what looks like a brushed steel bar adorned with interesting taps. The back half is the dark restaurant.

On our visit on Saturday, we shared all the starters – chicken wings, mac & cheese, and a half-rack of 8-hour smoked ribs. The wings and ribs were particularly good, sticky and tender without being impossible to eat. For mains, two of us had the 12-hour smoked ox cheek, and two the chuck steak burger. We tried all the sides. The ox cheek was excellent – although slightly drier than the version I had at the preview a couple of weeks ago. Hopefully they can get that moistness back. The burgers were a hit – “generously meaty”, if a little hard to eat. The “Iceberg & burnt onion” side was also very popular. Nothing disappointed in fact.

While one person worked his way through more of the beer menu, the rest of us tried a Tuscan red from the very limited wine list. It did the job admirably and felt fairly priced.

There was just one dessert on the menu and as we were far too full to contemplate it, we were generously given one to take home. I’ve just eaten it – it’s a banana & rum tarte tatin – and even a day on it was very good (and lighter than it looked, but I’m glad I reheated it).

One Sixty opens officially on Tuesday at 5pm at which point they’ll take you in off the street. I suspect it will be popular over the first few weeks, and both kitchen and front of house will find themselves tested from the start. I wish them well – it’s refreshing to see something genuinely different and independent moving into the area. I’m looking forward to giving it the full #whampreview treatment very soon.