There’s already a campaign set up to contest the plans for 156 West End Lane, which affects Lymington Road residents.

In October, The Gardens bar on Broadhurst Gardens is going to become a “colonial style cat jungle & human restaurant“. 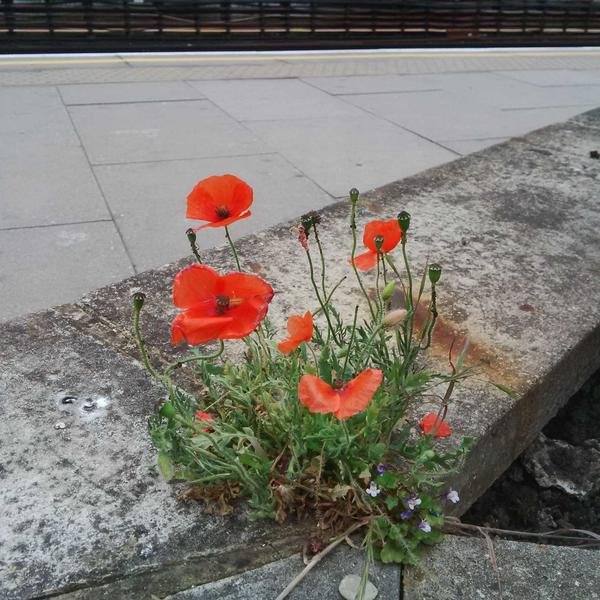 Poppies at West Hampstead – not part of planting via Mark Amies

The Petite Corée was featured on Korean TV. I’m afraid I have no idea what any of it says, but it all seems very positive.

Holistic Hair & Beauty is closed as of Monday. Customers can visit its Belsize Terrace branch if they find themselves desperately short of hairdresser options in West Hampstead.

Property News looked at how tenants have reacted to the election.

In the never-ending saga of “When will The Railway open”? The latest is that it could be this Friday.

In South Hampstead, the police team are taking a zero tolerance approach on pavement cycling. and imposing the £50 fixed penalty notice.

The Google Streetview car was spotted in West Hampstead and Kilburn.

It seeems someone didn’t like someone else’s parking on Achilles Road (NSFW).

Camden has confirmed that it doesn’t have the budget to pay for Christmas decorations on West End Lane this year. The West Hampstead Business Association is raising funds instead – anyone is welcome to contribute. The WHBA already has the hanging baskets back up for the summer.

La Traviata at The Tricycle is our Culture Hub Pick of the Week.

A rather nice looking house on the corner of Finchley Road and Heath Drive is being knocked down for a new developent. Good “front and back” photos here.
http://forum.westhampsteadlife.com/discussion/203/east-west-hampstead-approved-demolitions

There’s stuff for sale and for free on the Forum, or have your say on the cat café or the 156 West End Lane plans.

Local historian Ed Fordham is looking for volunteers for this year’s Kilburn History Festival in late October/early November. Contact him for details.

It's a shame that whoever watered the West Hampstead hanging baskets has jetted most of the compost out onto the pavement. #whamps

Tulip gives maiden speech in the House of Commons