The West Hampstead & Fortune Green Neighbourhood Development Plan was passed in a referendum. An overwhelming 93% of the 2,522 votes cast were in favour of the plan. The plan is therefore now a statutory planning document and it looks like 156 West End Lane will be its first real test.

Camden is launching a consultation on libraries this week. There’s already a “Save West Hampstead Library” campaign and petition up and running, led by local councillors – although it will be their Labour colleagues making the decision on any closures.

The Battle of Britain flypast went overhead on Friday to the delight of many locals, and the confusion of others.

Spitfires over West Hampstead via @mauriceticulous

Oktoberfest in Kilburn Grange park will go ahead says Camden.

The Thameslink station took the brunt of passengers on the tube strike days – and groaned under the strain.

On July 18th, The Sherriff Centre celebrates its 1st birthday – there’ll be a BBQ and various activities.

Whampdinner at Toomai was a big success – the cocktails being particularly well received.

There’s talk of a kosher restaurant/bakery opening in West Hampstead later this year.

On the Forum this week – the usual mix of things for sale or wanted (including goldfish!) and the start of a discussion about restaurant decking! 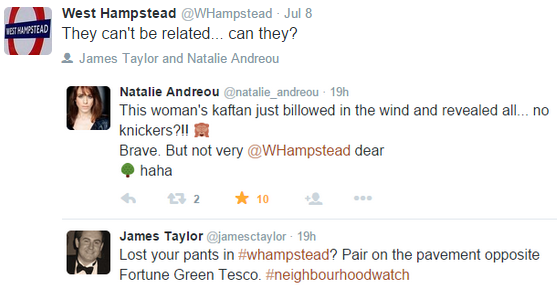