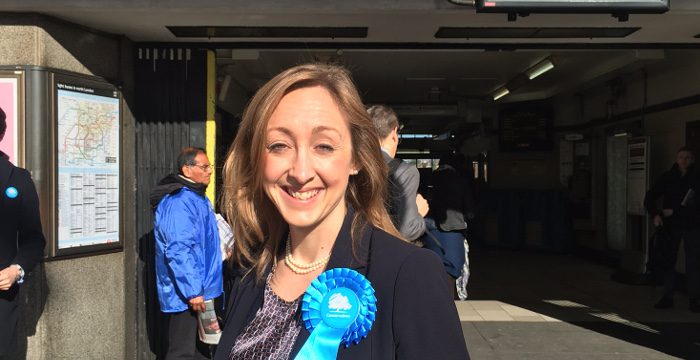 Hampstead and Kilburn is one of the Tories’ top target seats – one of the few in London on that list. In both 2010 and 2015, Labour managed to retain the seat by narrow margins. In two short years Tulip Siddiq has established her name and profile among H&K voters but with the Conservatives riding high in the polls nationally, will Claire-Louise Leyland be the candidate to finally take the seat? And if she does, what sort of MP will she be?

Like her fellow candidates she lives locally (Primrose Hill), but  was born and grew up in South Africa, although her father hails from Lancashire. She returned to the UK in 1998. Even though her father lived and worked in South Africa as a ex-pat, Claire-Louise says that “he was still very passionate about the Queen, England and Margaret Thatcher – plus he was a strong Liverpool supporter” crediting him with her interest in politics. On her mother’s side her great uncle was an MP (in South Africa). 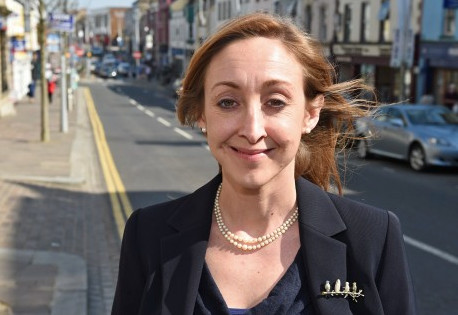 Claire-Louise Leyland, stood as the ppc in West Tyrone in 2015. Will stand as ppc for H&K in 2017 Image: Ulster Herald.

In the 2015 election, she stood for the Tories in West Tyrone. It’s a Sinn Fein stronghold and the Conservatives don’t traditionally fare well in Northern Ireland. No great surprise then that she came eighth out of nine candidates with less than 200 votes, but it was of course a valuable experience. Claire-Louise also felt it was important the Conservatives stood so voters had a national choice, to help move away from any sectarian mindsets. It’s an unusual rationale, but stems from her experience growing up under apartheid in South Africa and from her work for the Westminster Foundation for Democracy (WFD).

With the WFD she has worked in Bosnia (seven times), Georgia and Moldova. “They send out people to strengthen democratic organisations, such as women’s groups,” she explains. She has also worked as a voluntary therapist with children in South Africa and on the Syrian borders helping those with PTSD.  Her work focuses on art therapy and as well as being a practising therapist she also runs a masters programme training art therapists.  It’s an atypical  background for a Conservative candidate.

In the referendum, Claire-Louise campaigned for Remain, though has now aligned herself with the Conservative party policy on Brexit, when she could have taken a softer approach.  Why?

“It was a very difficult choice in the referendum,” she say. “I knew I was going to vote for Remain which is why I campaigned for them. I respect the fact that everyone across the country had the opportunity to think about the issues and make a choice and we need to respect the democratic institutions… there was an enormous amount of information summing up both sides of the issue in the mainstream press. So people had the information to make the decision… A choice was made, a decision was reached and if there were flaws in the system all we can do at this point is learn from them for the future, but we have to accept the decision that was reached.”

Of course, Hampstead & Kilburn is clearly Remain country, so inevitably not everyone she meets in her campaigning agrees with her. Her ward of Belsize has 1,400 resident EU citizens. “I’m meeting people whose lives are in limbo and who have a sense they are not in control of their future. Having grown up in South Africa in a state of emergency it was something I have experienced”. So her message to EU nationals is that she’s aware of the uncertainty around their future and believes this is an issue that needs to be decided at the start of negotiations.

When asked about how Remain voters will vote in this election, she played the Jeremy Corbyn card; saying that whatever the reason behind their referendum vote – personal, business or European idealism – “they are all concerned about having Jeremy Corbyn leading our country in the Brexit negotiations. We have to make a decision about who will lead our country.”

One positive sign for the future is that Claire-Louise has noticed that people are showing a greater interest in politics since the referendum. She thinks that not everyone is taking on the challenge of how you use your time and energy to engage with the issues. Her experiences in eastern Europe showed how alien the idea of having agency within their community was to some people – she cites an example of people complaining about litter but never picking it up, or even realising they could; which clearly resonates in Camden.

“In this country you think everyone knows they have a voice and can get engaged. When I moved here it never occurred to me that people wouldn’t feel able to shape their country, but I have worked in Hackney and there are kids who don’t recognise this.”

During this short election campaign, Claire-Louise has talked much about her “plan” for Hampstead & Kilburn, but has not elaborated much further. The Conservative manifesto was just being been published when we spoke, and she said that then she would set out a clearer message about what that would look like for the constituency. She does say the usual sort of things about residents having someone who will listen to them, talk with them, hold Camden and Brent councils to account as well as the Mayor of London. She talks about ensuring that education, housing, policing and other services are delivering the right results for our community, transport and infrastructure. To be honest, it’s still not clear what her “plan” is, but now that the manifesto has been published, she will be able to clarify, hopefully at Tuesday’s hustings!

“I believe there should be real scrutiny and evidence-based decision making and that local people’s needs should be at the heart of thinking. What I don’t want to see is the Labour Mayor of London and two Labour councils using our area to rebuild the Labour party. As a community we can’t have our needs put second to a part of the Labour party”. 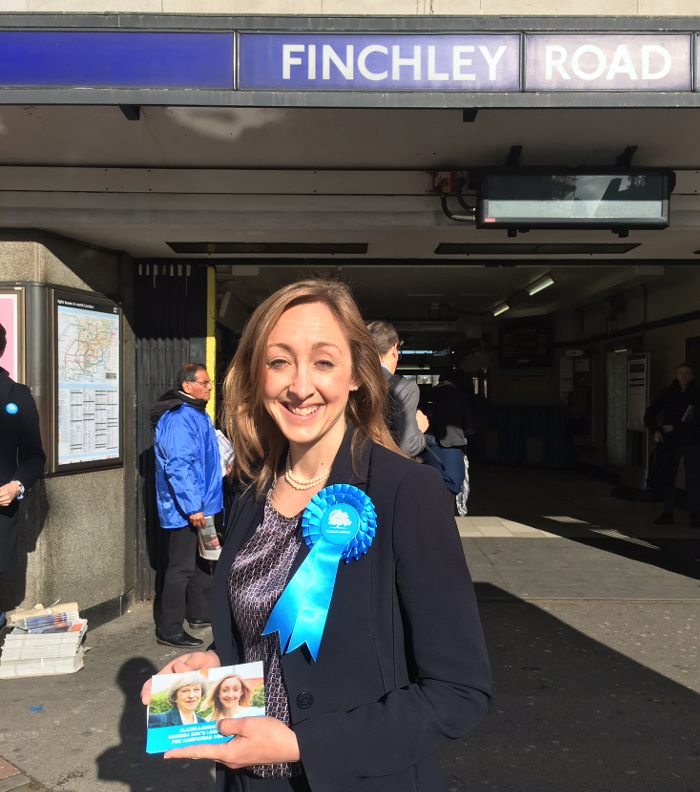 She talks extensively about local government, and suggests that while Camden Labour blames local cuts on central government funding cuts, in fact there was “an extraordinary amount of duplication of services and inefficiency, a lack of clear evaluation and lack of accountability,” when she was elected in 2010. “My understanding of what the government was trying to do was to make the system of [local] government more accountable, more efficient and better integrated.” She says that overall, she thinks “local government is a much tighter, much better system. I think it is a pathfinder for the how the NHS can adapt to change.”

Aside from Brexit, what other issues are coming up on the doorstep?

“Waste and recycling, but also schools funding. London schools are now the best across the country. I have been working in schools across London since 2001 so I see that they have high levels of need and that needs sufficient funding.” Notably, Labour controls more than twice as many London boroughs – which are responsible for education provision but not funding – as the Conservatives. The Conservatives have pledged that no school will have its budget cut and the total budget will rise by £4 billion over the next parliament.

In West Hampstead specifically, Claire-Louise cites concern about the level of overcrowding at the Underground and Overground stations, and also says community safety is being raised. “We really need to take care with the Pathfinder model, i.e., the integration of Camden and Islington police forces doesn’t leave the outer edges of the boroughs worse off”.

Overall, she seems to fall fairly squarely behind her leader by adopting a relatively interventionist approach for the state. “The system functions well in many ways but where it does not then it is right for the Government to intervene.” Council tax is a good example – with the rate being based on 1991 property values. “Once Brexit negotiations have put us in a secure position, it will be time to tackle issues such as a revaluation. That will an opportunity to refine the system”.

If, in the early hours of June 9th, Claire-Louise is our next MP, what can we expect from her? “I’m interested in being a constituency MP. I’ve come into this because this is the area I want to serve. You don’t have to be in Government as there are many other ways you can influence outcomes. You can sit on APPGs [All-Party Parliamentary Groups] and do all sorts of work at committee stage. Every layer of the system is just as important – I like to do the bit I’m doing to the best of my ability”.

Of course, had the election come after the proposed boundary commission changes (which could still happen), then Barnet’s Mike Freer would likely have been the candidate. Should Claire-Louise and Mike both win this time around, who then would stand for a new seat? “Honestly? I don’t know”, she said, looking slightly sheepish. “That’s politics!” she agreed.

Finally (and without using the words “strong and stable”), why should someone vote for Claire-Louise Leyland? “Because I am incredibly committed to our area, proven that I can get results for our community and I will work hard on your behalf”.