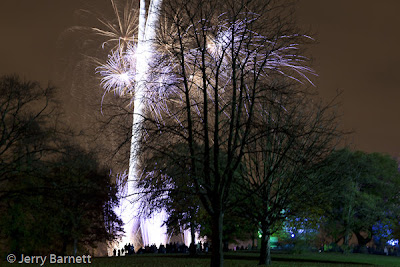 Ever since Camden council closed the Primrose Hill fireworks, locals have had to make more effort to go and see a decent organized display (although some people still just keep coming to Primrose Hill armed only with ignorance and the phone number of the New Journal).

Clearly your experience of Bonfire Night rather depended on where you were. These two tweets were just 3 minutes apart:

Digest went to Roundwood Park in Willesden for Brent’s firework display on the day itself, even getting the treat of a Bonfire Night sausage. The display was great, although the much advertised sound system didn’t seem to carry to where Digest was standing. Friday was a fairly quiet fireworks night although maybe they could be heard but not seen.

Come Saturday and the north London action was at Alexandra Palace. The crowds thronged, the fireworks did their whizz-bang thing, and this time the obligatory Star Wars theme music was clearly audible. A sizeable West Hampstead posse fought its way through accident-delayed traffic and walked up hill and down dale to get a good view of the pyrotechnics.
Despite grumbles and moans, there doesn’t seem to be any likelihood of organised fireworks returning to Primrose Hill anytime soon. Where do you think Camden could host a fireworks display without risking a crowd crush?
Commercial aspirations
Glo’s temporary closure has become permanent. The West Hampstead branch has been dropped from the company’s website and then a To Let sign went up in the window a couple of days later. Glo always seems to have struggled with its confused menu and slightly odd location. It was rarely full, and must have competed with the ever-popular and good value Banana Tree just up the road.
The local Twitterverse got all excited at the prospect of a new shop replacing the convenience store opposite the Thameslink entrance. 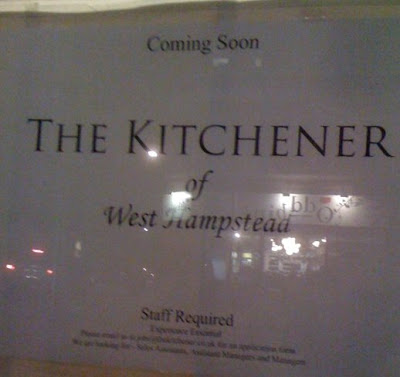 @Gitfinger spotted the sign and followed up to find out precisely what sort of staff experience the mysterious company wanted (one might argue they missed a trick with their recruiting poster: “Kitchener – your country needs you” etc.). Eventually though it was @bubela who was first to solve the (not very cryptic) puzzle:

The saga of the commercial units in Alfred Court continued. An agent explained to Digest that it neither the restaurant nor the retail space were likely to be a typical high-street chain. More about this on the blog.
Accident black spot
Wednesday morning got off to a bad start.

The stretch of West End Lane from Iverson Road to Broadhurst Gardens is particularly narrow, with three different buses ploughing down it and pedestrians frequently crossing at any opportunity. Accidents here are too frequent:

There was even an accident on the night of the first whampgather at the same Iverson Road/West End Lane junction. One cycle commuter’s views are clear:

Cycle accidents in London are on the rise, as more of us turn to two wheels in the wake of high public transport ticket prices. Ride carefully! #whamptravel
Good news/Bad news
The Jubilee Line was open south of West Hampstead this Sunday. Digest urged readers to make the most of it.

But Councillor Keith Moffitt quietly dropped a bombshell earlier in the week. Details were not forthcoming. I think we all dread to imagine. #whamptravel