It was a bank holiday weekend so printing presses took at break, so this is being posted a day late. Now on with the news.

A guy had his mobile snatched outside the Thameslink Station. And a woman had a substance thrown in her face in Kilburn (thankfully it turned out to be ‘only’ boiling water).

All this prompted WHL to talk to our local police sergeant and look at the crime stats. And yes crime is on the up – 50% in Fortune Green.

Tulip offered to help sort out rubbish problems, but she is our MP not a councillor and this is a council issue.  Instead please email WHAT (), our local amenity group with details of any house where this is an issue (bins left on street), fly-tipping hot spots and other issues you are having (e.g. how to get new bags for the food waste bins) they will compile a report. 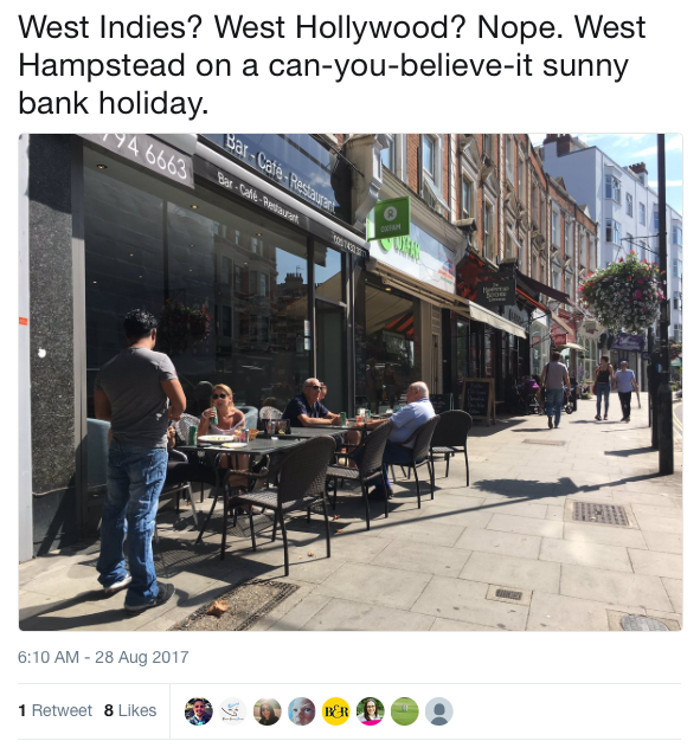 More detail on the shooting of Yasir Beshira.

And even the Mayhew Animal Home has been affected by the uptick in crime – someone stole their van.

A West Hampstead boy went missing.  But he’s been found.

Remember we calculated how rich you need to be to afford housing in West Hampstead?  We underestimated – Pete Redfern bought a £709,950 flat at One Mill Lane – allegedly at a staff discount.  Who is he? The boss of Taylor Wimpey, who earned £10.7 million over the past two years. And the ultimate irony – he’s also a trustee of homeless charity Crisis.

Camden have paid out £18 million and counting on the Chalcot’s Estate; £10 million on evacutation, a further £8 million to make the blocks safe. Plus will pay millions more to remove and replace the cladding.

West Hampstead resident, Denis Quilligan is organising a tenant fightback against the merger of Notting Hill and Genesis Housing Associations.

The band who sang ‘Be the Man’ at Glasto about Matt Ogston met Matt at Naz’s memorial bench in the cemetery and you can hear the song here. It’s very moving.

It’s not West Hampstead, but it was the Notting Hill Carnival, so we make this our ToTW

For the first time in the history of 'policeman dancing at NH Carnival' trope this guy is good ?? pic.twitter.com/NDTMqeV8KF

What have you missed since August 28th?