The Conservatives chose their candidate, setting up all female fight for H&K. (More election news below).

Father Andrew is stepping down as vicar of St. James Church citing the Church of England as being ’institutional homophobic”.

There was a ‘clock up’ at West Hampstead Square. Some liked it , while others thought it looked like a guillotine or or didn’t like the patination (i.e. it’s rusty). 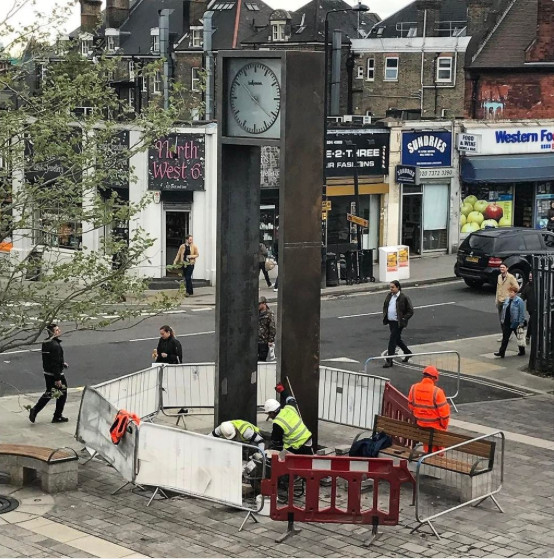 And the clock is up. As seen by @VHaberdashery

West Hampstead’s favourite stall at the farmers’ market is officially Brinkworth Dairy. We got the lowdown on its success.

Our historian uncovered the strange story of a local diamond broker. And he will be at the Library on Tuesday with tales of WW1 spies in Camden.

Nazanin’s appeal to the Iranian High court was turned down – and reported from the Wall Street Journal to the China Daily.

So – glad to see that progress is being made of clearing up the Black Path.

Camden’s new garden waste contract is still causing confusion. You can sign up on Camden’s website (and see who in your postcode has signed up). You can club together with a neighbour informally to share a collection – rather than just dumping your waste in their bags, not just dump in their waste in your bags as some are doing.

Time Out reported 14 things to do West End Lane, and its annual round up of top coffee shops included the Sanctuary Café in the Sherriff Centre and Loft (at the top of Greencroft Gardens) but missed Wired. Pah!

The Londonist took a nostalgic look at Kilburn, no longer Ireland’s 33rd County.

Local artist Zoe Grace, who has an up and down life, is taking part in an exhibition in Fitzrovia.

@JfmJm @NickGriersonWH @WHampstead I have now written to Camden to see if the foxes can be trained to collect the bags and deliver them to Veolia. No reply. Typical!